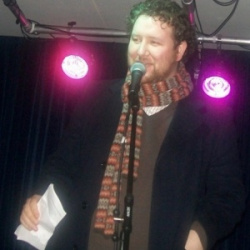 Write Out Loud Wigan celebrated its 10th birthday tonight, with a special night planned to mark the occasion at The Old Courts venue on Thursday 8 September. Its history stretches back to a first open mic night launched by Write Out Loud’s founder Julian Jordon in Wigan’s Orwell pub. In an interview with Greg Freeman, Write Out Loud Wigan’s long-term organiser and host John Togher, pictured, reflects on the poetry stars that started out at Wigan, the move from the Tudor House hotel to The Old Courts, the immediacy of poems written moments before in the bar, comperes in wedding dresses, and Wigan’s “anyone can get up there and have a go” philosophy.

When was your first taste of Write Out Loud Wigan? Were you there from the start? How did you become compere?

I'd heard about a poetry night that had started in Wigan and went down to check it out in January/February of 2007. I'd never heard of Write Out Loud before that, which goes to show the events WOL put on are great at promoting the website. The Wigan night had started September of 2006 after an initial event at the Wigan Words festival. [Write Out Loud founder] Julian [Jordon] convinced Gillian Forrester [co-ordinator of the festival], to co- to fund a Wigan Write Out Loud night for a year, and here we are now, 10 years later. I took over running the night soon after my first few appearances there, compered on and off before deciding on a guest compere every month. Julian is to blame for encouraging me to take it on …

Is it different from other open mic nights, in your opinion? If so, why do you think that is?

It's hard to put my finger on what makes it different; it just is. There is an irreverence to the night that has always existed. There's the social aspect, with many coming from all over to the event. I think what you get at a Wigan night is a friendly, welcoming atmosphere. There's no pretension. Every poet matters, whether they are giving us words on the latest political temperatures or about a time in their life that was challenging, they can be complete first timers to poetry, or seasoned performers; we like to think that everyone is respected, supported and loved. 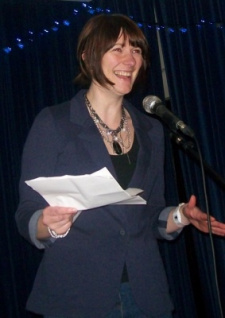 A number of superb poetry performers have graduated from Wigan, including Louise Fazackerley, pictured left, Joy France and Laura Taylor. Is it easy to spot star quality straight away, say, as soon as someone walks on to the stage?

Sometimes you can hear a poet's words curl around your ears, feel the truth of the lines and you can tell they've got something. We have had a number of younger poets becoming regulars, and some of those are future stars. In terms of other regulars, many of them have gone on to be published. There's a few poets that have inspired others to write poetry and they are the ones I'm most proud of. Their poems and performances have been heard by those untouched by poetry, and they have come back to the Wigan event with a poem, they've been inspired to pick up a pen and have a go, find some creative release they never thought they had. Some have become regulars after being inspired to write by some at Wigan.

A couple of years ago you had to move from the Tudor House hotel to The Old Courts. Has anything changed since the move?

The Tudor event was a very different beast to what we have now at The Old Courts. It's a bit more intimate, less bar noise, less rowdy, but still has a veil of irreverence that at certain moments is lifted to reveal a more sensitive side to the event. We still have an “anything goes” kind of policy, though. Many still miss the Tudor, but we had to move on; it will always have a strong place in all our memories and Russ and Francis deserve a great deal of credit in taking a chance on “poetry” all those years ago. Around that time, I was told by some Wiganers: “'Poetry?! In Wigan!? Stop being gay and eat a pie!” We've come a long way from that!

Credit goes to The Old Courts for housing us at short notice, particularly as they weren't really ready to be putting on events at the time. From then they listened to concerns some had when we first moved there and they were straight on it and brought those improvements in over the first 12 months, especially my request for Guinness! 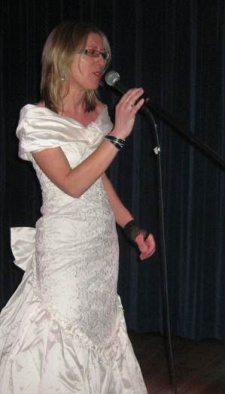 Highs and lows? What has been your best moment at Write Out Loud Wigan? Care to speak about the worst?

Like most events, we have had our bad months in terms of turnout, but the poets there have come together and made a good night of it. Some of the best moments involve that “anything goes” policy: Isobel in her wedding dress, (pictured left), Baz and his bed/fridge/hats, (pictured below), Christmas poetry with Elvis, tap-dancing comperes, any poem written at the bar on the night, a first-timer blowing everyone away with the power of words.

Do you think spoken word has changed over the years? If so, in what way?

I'd say so, yes. It seems more accessible to the general public. More subjects are being written about and the recent political climate has given rise to people wanting to share their anger. We have Cameron to thank for the rise of some poets in some northern towns, particularly those hit by austerity, like Wigan. The thing I like about poetry is it is one of the most immediate art forms. It can be shared to an audience within minutes, in some cases!

You’re celebrating 10 years of Write Out Loud Wigan. What do you think has been the secret of its success?

The people. The poets. Those that have turned up month after month to share their words. They keep us going. We have often relied on word of mouth to promote the night – plus the welcome advance news items on Write Out Loud’s home page, of course! Thankfully most have had good things to say to friends. We also say anyone can be a poet; anyone can get up there and have a go, and many have! 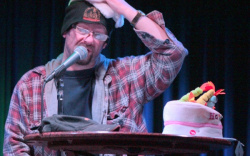 What do you plan for the big night? The same format as usual, or any special features?

There will be a few special features, yes. Some have had the idea to share the first ever poem they read at a Wigan night. There'll be a photo show of all the events as backdrop, and a few other surprises I don't want to reveal till the night.

Does it still give you the same sense of excitement?  What is it that makes you want to carry on?

I love words, the way they wrap together in a person's mind around a subject, a theme, an experience. Every month I've run this event I've been surprised, moved, shocked, amused, and emotionally affected. I love to see younger poets take their first steps onto the stage, into the spotlight, behind the mic, see them grow into their thoughts on the world. I love to see anyone new to poetry discover something in themselves they never knew they had. I'm excited of the thought, each month, of what tonight's event will bring – a peek into a pensioner's routine, a listen to a young man in love, a student's view on the role of education for her generation, an intimate reading of a traumatic experience, a rant against the Tories, or a folk tale, in Wigan dialect, of a well-known Wigan character. It's the unpredictable that brings me back.

Can't believe no-one's commented. Lovely review John. It's gonna be an epic night - if you're in the vicinity get yourselves down there!