Getting in the groove at the Square Tower 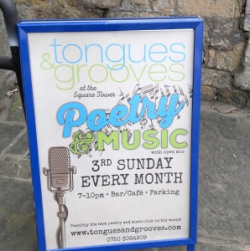 Take one historic, atmospheric venue that once helped to guard a key section of Britain’s coastal waters. Add poetry and music there on every third Sunday of the month, and what have you got? It’s Portsmouth’s long-running night Tongues and Grooves.

The historic venue is the Tudor-era Square Tower, which looks out on modern-day ferries passing by on the Solent, close to the spot where Henry VIII’s flagship the Mary Rose unexpectedly sank during battle with the French in 1545. Tongues and Grooves, which spent its first 10 years in the back room of a pub in nearby Southsea, has been meeting at the tower for the past year. It was founded by Maggie Sawkins and Bernard MacDonagh at the Florence Arms, and the mix was poetry plus music from the start – “to help the medicine go down”, as Maggie put it. On Sunday  the music was provided by singer and guitarist Sue Apicella and Dave Jordan, and four saxophonists who go by the monicker of – you may have guessed it - The Four Saxes.

Guest poet was Liverpudlian Paul Birtill, who delivers brief, rapid poems of bleak humour and devastating punchlines, as dry and as funny as pocket cartoons. He eschews time-wasting introductions, and as a result can give you up to 40 poems in a 20-minute set.  An example of his take on life: “Some deluded and pathetic middle-class / lovers of life are beginning to say / that seventy is the new fifty, it’s / not true of course, they are really / very old and going to die quite soon, / some of them in a lot of pain.” (‘Ninety-two is the new eighteen’). 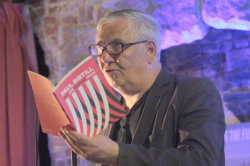 His view on writing poetry? "I write poems / instead of novels. You start / at nine and finish at half / past and have the rest of / the day to yourself - money's / crap though." As well as a strangely touching war poem ‘The Secret Crier’, there was the remarkably terse ‘For Ted Hughes’: “The birds are migrating / - who gives a fuck …” He began his reading with the seasonal ‘August’, in which he celebrates “the last month / of summer, autumn round the corner. / At last I can see the dark at the end / of the tunnel.” During a brief chat he revealed his great admiration for that poetic doom-monger Philip Larkin – but Birtill's gloomy outlook is really in another league. My wife, who has little time for more nuanced page poetry, found all his vignettes, full of unexpected riches, an absolute hoot. As the evening went on there was popular demand for two encores.

The Tongues and Grooves website includes some tips for open micers such as “if your poem goes over the page it’s too long for open mic”, and “good poems don’t come easily. Avoid poems written on the back of beer mats, flyers, etc. If you’re serious, take advantage of poetry workshops and courses; read contemporary poets; and subscribe to at least one poetry magazine.”

Experienced poet Denise Bennett led the open micers with two poems about wartime bombing that had been inspired by an exhibition. ‘101 High Street’ described the destruction of a building in which 14 people died: “What Jericho has happened here?” In another poem the city “burned like a beacon … some said you could see the glow in France”. There were quick-fire offerings from Richard Peirce, with a poem that referenced Blade Runner, and Peter Cresswell, pictured left, who provided a poem apparently dictated by a friend about her wayward lover. 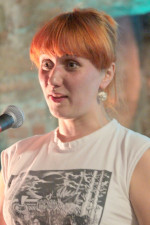 Kristina Demjanova, pictured right, who disarmingly told us that “English is my third language”, nevertheless gave us cleverely constructed poems containing such lines as “You’ll be a kite, I’ll be the string”, and “I’ll teach you feel, you’ll teach me fly.” Stella Bahin, who I last encountered just over a month ago as one of the South Downs poetry bike tourists, had cast aside her cycling gear to deliver a poem written after hearing a trainee teacher claim that poetry was gay: “Poetry swings both ways, ok?” By way of emphasising the thriving local poetry scene, she also plugged another Portsmouth open mic night, at the Aurora Café in Southsea’s Albert Road, on the first Thursday of the month. Compere Gareth Toms had the last open mic word, entering a plea on behalf of spiders in bathrooms: “Leave my web alone … Us arachnids don’t want anarchy …” 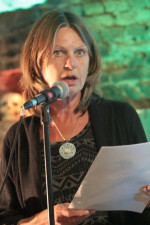 The guiding light of Tongues and Grooves, Maggie Sawkins, pictured left, who won the Ted Hughes award in 2013 with ‘Zones of Avoidance’, and is a tireless workshop organiser and tutor promoting motivation, well-being and social inclusion, teamed up with Dave Jordan on a poem about a sergeant’s impressions on the ill-fated first world war Gallipoli expedition, and, with Dave on double bass, her well-loved ‘Things to do around Southsea’, which includes, among other things, the lines “get married for the third time”, and a new one this time around, I think, “win an award”. And always the refrain: “Go for a curry.”

Tongues and Grooves is run by an impressively large management team of seven, and organises one-off events around Portsmouth as well as its monthly nights. It celebrated its 10th anniversary in 2013 with a festival that featured John Agard and Neil Astley. Other celebrated guests over the years have included John Hegley, Matthew Sweeney, Mimi Khalvati, US war poet Brian Turner, and many more.

On Sunday night I was struck by the number of people in the audience that didn't appear to be poets. That was confirmed by Maggie Sawkins, who said: "Usually most of the audience is made up of non-poets. I think that's always been one of our strengths. For me the secret  is to think of the audience as a group of non-poetry enthusiasts. I've been to many poetry events that only consider the poets who are performing. The music is an integral part of the evening and we place as much weight on that as the poetry." The Square Tower has a welcoming bar, and nearby pubs do food on a Sunday night. Earlier in the day we had gone up the city's Spinnaker Tower for a panoramic view of Portsmouth and the Solent, stretching to the Isle of Wight. Much better than the Shard, I’d say. A splendid day and night out.

I was impressed by the way this gig is run...particularly the inclusion of some music and appeal to non- poets...It reminds me of how Chris used to run Gallaghers It is a credit to the organisers.

I'm intrigued that usually most of your audience is made up of non-poets, Maggie. To persuade so many to turn out for poetry, clearly it helps to offer them a spoonful or two of something else as well. You certainly seem to have hit on a good mix!

Thanks from all of us here Greg! The support of Write Out Loud is very much appreciated.