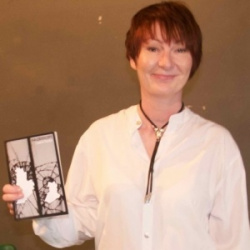 The rights of consumers in the face of despotic big business, women’s freedom to decide what happens to their own bodies, and the liberty to speak your mind without the threat of state censorship were major successes of the much-maligned governments of Harold Wilson, who learned of his 1974 election victory in Liverpool’s Adelphi hotel, with his wife, poet Mary Wilson.

A few hundred yards from there, at the boho café, 81 Renshaw Street, on Thursday night, another female poet sought to remind us that big business has more power than ever, that women still need greater freedom  to make their own decisions, and of the continuing need to push back the frontiers of freedom of expression, with the launch of her much-awaited first collection, Kaleidoscope. Laura Taylor’s words are pulled from the pit of poverty and powerlessness, crafted from the bare bones of her background: “My dad, thrown on the dole 15 times in as many long months.” Imagine what that did to a man whose dignity in those days came from “feeding your family”?

In that era, near where Laura was brought up, I worked at Kirkby College, whose catchment area had 92% school leaver unemployment. Yet some of my colleagues were part of the culture of blaming the victims, and Norman Tebbit told the unemployed to get on their bikes to find work. Some of the larger employers discriminated against job applicants from Merseyside – they don’t want to work – and it became a vicious spiral. For many, hopelessness became a way of life.

But what can statistics tell you? For the truth, you need poetry, writ large and loud. For that you need Laura Taylor, who started her set with: there will be swearing. And not just any swearing, this is swearing as authenticity, telling it like it is, giving voice to the previously unvoiced. It’s the voice of the angry and the dispossessed, the voice of someone who knows precisely what poverty and discrimination are and can do to the human spirit, and she isn’t about to let anyone forget as she fulminates against the power of large companies riding roughshod over individuals, or corrupting governments and helping themselves to an unwarranted share of the world’s wealth. She lays into them all, with ferocity and finesse.

Fracking is but one, recent example of how money makes prostitutes of politicians, and Laura’s ‘Environmental Intercourse’ nails it in a way you just cannot ignore: “Gaia likes a jet inside her/moistening her shale/hungers for our filthy penetration/loves to get a fracking/with a whacking big drill/ejaculating methanol, we give her crack a thrill.” Laura is a dynamo of a performance poet, and I leave you to imagine the graphic gyrations that accompany her reading of this piece. Truth has its own eloquence.

It isn’t all ire, as she slips a little change of pace in. One minute she has you manning the barricades, the next laughing as she declares that, when she is old, she will not be wearing purple, in her “austerity-inspired personal pension plan” poem, referencing Jenny Joseph. Love is here in abundance, fuelling both her passionate political outrage and her pin-drop-silence-greeted love poems; though all of her work is infused with love, for all human beings, except those whose abuse of undeserved power merits no quarter.

Tony Walsh’s poem ‘Posh Things’ has a line that always snags me: “Posh things, like dads and that.” I was reminded of it with Laura’s introduction to, and reading of, her poem, ‘I used to call him Granddad’: “a door ajar, to let in light”; in whose beam we see a different, more tender, side of Laura from the political poet.

Rather less love than that for her unofficial granddad is showered on Margaret Thatcher in a poem written in response to the former prime minister’s demise, taking the form of a litany of the baroness’s many malefactions, some of which remain contemporary concerns as we weigh the continued arrogance of those individuals and groups corrupted by that woman’s immoral interference in inter alia, the Hillsborough and Orgreave scandals. We urgently need more voices like Laura’s to remind us, not just of the facts, but the continuing effects of such misdeeds.

Joy is well-named. It’s what she brings and what she elicits in her audience, but she can do serious stuff too, as we witnessed in her relating the story of helping her autistic student, Andrew, to “come out of his shell” and learn to interact better with fellow humans, particularly his mother.

Joy and Laura started writing and performing poetry at around the same time as each other, at Write Out Loud, before extending their considerable talents more widely. In Joy’s case, many a gig around the country and now creative-in-residence at Affleck’s Three Minute Theatre in Manchester.

When my nine-year-old granddaughter’s school asked the class to turn up dressed as their favourite superhero, she went as Emmeline Pankhurst, and I am delighted to report that the teacher was proud of her for doing so. In spite of their being terrorists, as Steph Pike reminded us in her poem Suffragette City, which records the movement’s 1913 blowing up of the cactus house in Manchester’s Alexandra Park with a pipe bomb: “their skirts crackling with revolution… …as the morning exploded in a thousand diamanté stars.”   A blast, too, was the seven-year-old “little girl in a bile yellow dress waiting to explode” in a forceful poem railing against society’s straitjacket stereotyping of girls and young women.

But the big bang was left until last, as Steph stepped up to announce her desire to bang David Cameron, as in have carnal knowledge of, even expressing a willingness to dress in twin-set and pearls; and the room rocked, with laughter that is. Steph Pike’s work is also published by Flapjack Press.

Louise Fazackerley’s contribution comprised a short text from the side of the motorway where her car had come to rest. Though disappointed, the audience can have no reason to complain at a superb evening and momentous occasion, the launch being what I hope to be a further step along a glittering career for the unique talent that is Laura Taylor. Her book should be on school curriculums. But it won’t be.

The event was compered by Laura herself, and organised by the admirable Paul Neads whose Flapjack Press provides a valuable and exciting opportunity to further showcase the voices – in print - of performance poets from across the UK’s huge, talented live poetry network. Some of whom, like Laura, might be writing the revolution.

Kaleidoscope by Laura Taylor is published by Flapjack Press , from where copies of the book can be ordered for £8 (£8.99 with P&P).

Just to correct one point - I'm not Creative-in-Residence at the 3 Minute Theatre but at Afflecks (Palace) itself - Manchester's iconic emporium of idependent shops / stalls where all the weird n wise n wondeful people go!

Was great to see so many people there, sorry I didn't get much time for catching up.

Funnily enough, I was a kid in Merseyside at that time and was part of the exodus to London. The divide has now become much more complex; weirder forms of divide-and-conquer are now at play. Partly inspires my poetry too. That must be the silver lining!

Wow sounds like a great night. Lovely review Julian. There's no-one quite like Laura in full flight or should I say fight...what a stonking performer!

Thank you both. I just tried to let the words speak for themselves.

Julian, thank you so much for this blinding review, and for coming to the launch. It was a great moment when I saw your face :D

And Harry - ace to see you too! Thanks so much for coming and buying a copy. 'Robust' :D Well that's one way of putting it haha :D

Julian,
Very good account of what was a quite robust launch evening.

I like that alliteration in the second paragraph...and the way you quote from the genitalial `Environmental Intercourse, (which - being from the personna of the fracker - manages somehow to also criticise a masculinely brutal kind of rape.)

It was great to actually meet you, a modern facilitator of
poetry, at last. (especially just around the corner from the old O`Connors Liverpool Scene hangout)