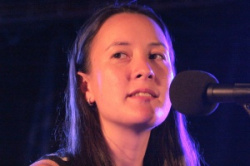 There was a chance to hear three prizewinning poets at the Troubadour on Monday as Sarah Howe, pictured, Michael Symmons Roberts, and Caitriona O’Reilly took part in What We Should Have Said, a kind of poetry parlour game and regular Troubadour feature in which words, music and humour combine.

The poets respond to cues and prompts from each other, from writer/performer/director Stuart Silver, who devised the format, and from musical suggestions from Huw Warren on keyboards. It’s a good opportunity to hear samples of their work from each poet, as well as witness them thinking on their feet.

Howe, who was born in Hong Kong, won the TS Eliot prize at the beginning of this year for her debut collection, Loop of Jade, Michael Symmons Roberts has won the Forward, Costa nd Whitbread prizes, and Catriona O’Reilly won the Irish Times Poetry Now award for her third collection, Geis.

One of the themes, as you might expect, was geography. O’Reilly, pictured below, talked of Iowa, “a darkening indigo shimmer above tracts of corn, / …  Free of the deadweight of ice, / it gains an inch a year.”  That took Howe to Arizona, where “heat in this place goes deeper than sleep”. Symmons Roberts, still thinking about ice, found himself in a melting Antarctica, “living off starfruit”. Howe also read from her poems ‘Islands’, about the ferry leaving Macau, “that isle of lotuses, my feet slipping on the wet, wood deck”.

Huw Warren introduced some dramatic, cinematic notes, changing the mood, with O’Reilly talking of a phone ringing in an empty house, and Symmons Roberts, pictured left, summoning up the “the footfalls of God in the garden …  every sigh gives us away”. The poets were creative with creatures: Symmons Roberts’ ‘Hitchcockian’ imagined the birds taking over, not by massing on window sills at dawn, but “with a single egg inside each one of us”. O’Reilly’s ‘Spanish Fly’ was “a mineral-winged insect pulverised / with toads’ bones, moles’ teeth and iron filings.” In Howe’s ‘Pythagoras’s Curtain’ cicadas “cadenza the acousmatic dusk.” 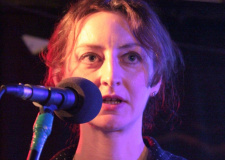 Sometimes the connection was not obvious, as when Stuart Silver’s thoughts on how we want to see the world in our lifetime ended up in Debenhams, which then encouraged Michael Symmons Roberts to introduce ‘How to Raise the Dead’.  The pauses between contributions were long and Pinteresque at times as both audience and poets gathered their breath. A lasting memory is how odd and unusual words were savoured and rolled around the tongue. O’Reilly’s ‘Ovum’ spoke of “those other o-words, like bubbles / streaming through a soapy blow-hole: / from oblation and obloquy to oxlip and ozone”.

The first half of the evening saw a goodly number of Faber Academy poets past and present under the expert tutelage of Daljit Nagra and Jo Shapcott each read a poem in rapid succession, with Tim Richardson inducing laughter as he declaimed ‘Poet in Residence’ at a volume not usually encountered at the Troubadour, and Steph Morris talking of his poem that would be “planted out in mid-June” during the London Open Garden Squares Weekend, “when I’ve finished pruning it”.

Talking of dates and next month, this is also probably the moment to mention - as Coffee-House Poetry's host, Anne-Marie Fyfe, did - that the 21 June deadline for one of poetry’s big prizes, the Troubadour’s £5,000 international competition, is fast approaching. The judges this year are Jane Yeh and Glyn Maxwell.