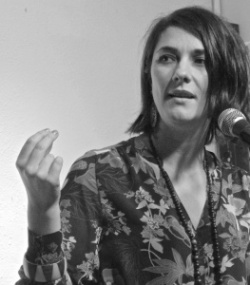 Performance poet Louise Fazackerley is co-hosting a new spoken word night in Wigan on Saturday 30 April. The Papercut at the Old Courts in Wigan will have one guest spoken word artist, one guest comedian and a mini-slam.

Louise said: “The idea is to have a high quality, entertaining spoken word night on a Saturday.  We want people to be able to chat, drink and dance as well as enjoy thought-provoking and funny live literature.  The venue is three minutes walk from the train stations and the Papercut finishes at 10pm - although there's a disco afterwards until 2am.”

Slam winners can progress to a final at Manchester’s Evidently spoken word night.  Poets can compete to win £25 on the night, leading to a £100 final in Wigan in November.  The Papercut slam winner gets a place in Evidently's December final and the chance to win £200 and possibly a slot in the National Poetry Slam.

She added: “If the night takes off we hope to invite nationally recognised poets so local audiences get to see the best people from across the country.” Louise’s fellow host is comedian Chris Boyle, and Saturday night’s first spoken word guest will be Thick Richard. More details

How to get your poetry published - or not, as the case may be ►