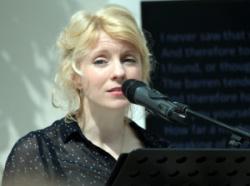 Liz Berry, pictured, read Shakespeare’s sonnets in her Black Country accent, and took us from the British Museum a little closer to Stratford-on-Avon and the West Midlands. Jo Shapcott described reading the sonnets as creating “the illusion that we can hear Shakespeare thinking in real time. They are that extraordinary.”

It was a nice idea to read all Shakespeare’s sonnets on 23 April 2016 – the 400th anniversary of his death – in the British Museum’s Great Court. But the trouble – and it was a big problem – was the near-impossible acoustics. The loudspeakers were not equal to the task of competing with the hubbub of noise created by the crowds of museum visitors milling about the Great Court, although things did improve when many of the audience chairs were moved nearer to the stage.

I was there for a couple of hours of the five-hour Shakespeare 400 Sonnetathon jointly staged by the British Museum and the poetry organisation Poet in the City. Alongside the enjoyable reading of Shakespeare’s sonnets by poets and actors – including a performance by deaf actor and cabaret artist Caroline Parker using BSL – we also heard selections of contemporary sonnets as well. 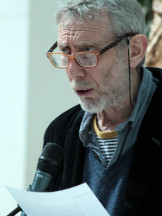 Michael Rosen pointed out that sonnets are “international”, and originated in Italy. He then read one of the Bard’s most famous sonnets, with its opening line “Shall I compared thee to a summer’s day?” (Sonnet 18), in Yiddish, followed by Wordsworth’s sonnet to Toussaint L’Ouverture, leader of the Haitian slave rebellion, and written when the Romantic poet was “a radical youth”. It includes a reference to man’s “unconquerable mind” in the final line: “I love that. Maybe we should tell the government about it,” Rosen observed. He also read ‘Blue Coffee’, by the “much missed” Adrian Mitchell, “a good friend and comrade of many of us … it’s not really a sonnet, but it’s got 14 lines”.

This idea that the form of the sonnet can be twisted was emphasised by Imtiaz Dharker, who read some of her own poems as well as others by John Donne, John Berryman, Carol Ann Duffy, Don Paterson, and Douglas Dunn. One was inspired by Sonnet 43: “Shakespeare plays with light and shade, and with grammar.” She asserted that most poetry is “really about love”, although these closing lines from one of her sonnets certainly isn’t: “Is Happy known to you? Tell Happy this / For its own good, to hide its ankles, cover its wrists.”

Liz Berry included work by Don Paterson, Julia Copus, Seamus Heaney, Carol Ann Duffy, and Hannah Lowe among her contemporary readings of sonnets about love between parents and children. The other performers at the Sonnetathon were poets Dean Atta, Laila Sumpton, and Kayo Chingonyi, and actor Ferdy Roberts. 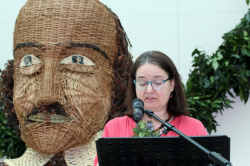 Each poet read between a screen displaying the appropriate sonnet on one side, and an impressive “wicker man” head and shoulders of Shakespeare on the other, by artist Hilary Burns. The Bard’s expression appeared both quizzical and amused. The last words should, of course, be Shakespeare’s: “So long as men can breathe, or eyes can see, / So long lives this, and this gives life to thee.” Lines that emphasise the permanence of his poetic legacy, even if he had not intended them that way. Greg Freeman

◄ Bang Said The Gun back in Manchester

Sounds like a great event, Greg, and one I wish I'd been in London to enjoy. There's no excuse for the poor sound, however, and I hope the BM take note and ensure they address that problem if they do something similar in future...