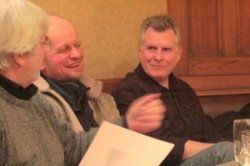 There’s a real warmth at the Beehive Poets in Bradford – and it’s not just from the open fire that gently toasted my behind as I was reading there. The weekly poetry night, a mix of readarounds, readarounds with guest poets, and workshops, at the atmospheric, gas-lit New Beehive pub on the edge of Bradford city centre has been held every Monday, excluding bank holidays, for nearly 17 years.

My fellow guest poet on Monday night was Cathy Benson, whose husband Gerard, who died in 2014, was associated with the Beehive Poets, as well as being a national poetry figure in his role as a prime mover behind Poets on the Underground. 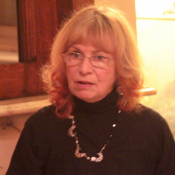 Cathy, pictured right, referred to her beloved late husband in more than one poem towards the end of her reading, paying tribute to him for helping her to find her own poetic voice, and adding: “I hear Gerard in this poem.” She recounted outings to York, to the boating haven of Lymington in Hampshire where the air vibrates with “the rigging’s soft percussion”, taking part in a communal dance on an island in Brittany, and Howth Bay in Ireland, where “I hold your hand, suddenly afraid …”

Other poems contained sharply-observed reflections on earlier times in her life, including her childhood in Scotland, and an amusing one about the X6 bus from Leeds to Huddersfield, that passes “the weir that collects plastic bags … the bridge over the motorway … the roundabout sponsored by Tesco”.  There was also a poem about a crow on a winter bird table in her garden, “a Richard the Third of a bird”. 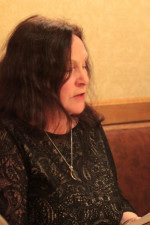 The quality of the Beehive Poets themselves was such that any one of them could have stood in as a guest poet. In three rounds of readaround we had poems about the Japanese-Russian archipelago (Kathy Bramley), a rusting Albion lorry, “after reading Geoffrey Hill” (Frank Brindle), a rousing poem by Barbara Howerska, pictured left, about her Polish father’s Christmas parties, with excellent use of repetition, and Mike Farren’s rueful account of reaching the ripe old age of 54, far beyond the age when rock and roll heroes are meant to die. I remember other intriguing lines as we went round the room … a reference to “semi-accidental dogging”, and another to “mainlining on masticated ticket papers”. My good friend Julian Jordon, founder of Write Out Loud, contributed a Larkin parody that went down well, and his fine poem about the unexpected that can and often does happen at a poetry night, to which the Beehivers responded with their own stories and reminiscences. 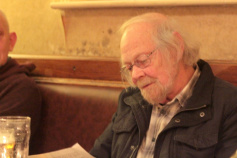 Earlier in the day I had been soaking up the sunshine in the centre of Bradford, among the fountains in the splendid City Park, marvelling at the city’s grand architecture. You don’t get this kind of thing – or anything like it - down in Surrey. The Bulgarian barman at the Beehive that evening took a different view of the city, it has to be said, displaying an impressive command of the vernacular. I suppose we were both tourists, in a sense. My abiding memory will be of the gentle smile of John Sugden, pictured right, co-ordinator of the welcoming Beehive Poets in their wonderful, gas-lit pub; sharing their poems, neither expecting nor receiving applause, all for the love of being together, and of being there.

I should add, hastily, that I was the sole purchaser only because Cathy had brought just two books along for her reading and none to sell; not because of any lack of interest in purchase by other audience members. Buy these books if you get chance. They are truly superb.

Otherwise typically excellent this, it is a poor review that neglects one of its major contributors, first-up guest poet Greg Freeman, with his assured delivery and wonderfully evocative, beautifully understated poems, particularly the one telling of his father's time on the death railway contrasting with his pre-war quiet job as a railwayman.

A great guest spot, Greg. You were, almost literally, on fire.

I agree about the overall standard of poetry, too. I felt particularly privileged both to hear Cathy Benson's magnificent poems, and have the privilege of being the sole purchaser of her books, complete with her handwritten notes therein. I read the books heading West over the Atlantic, and was transported back to my own childhood. A great evening in a great venue with some great poets.

I call it God's own country, too, Laura!

What a lovely review Greg. It's left me with a warm feeling has that :)

Glad you enjoyed the North, or God's Own Country, as I like to call it ;)