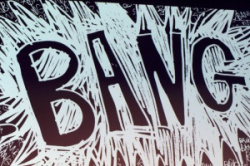 Bang Said The Gun has been a legendary spoken word night in London for a number of years, famed for its riotous atmosphere and its tongue-in-cheek credo: “Poetry for people who don’t like poetry.” Now, after six years of uproarious weekly shows in the room upstairs at the Roebuck pub in south London, they have shifted to a monthly night at the Bloomsbury theatre studio - from informal tables and chairs, to a theatre audience seated in rows.

The obvious question is, can the unique Bang vibe survive a move to a more formal setting? Firstly, the studio at Bloomsbury theatre is still a fairly small, intimate space. The traditional, cacophonous shakers filled with pasta were handed out as you went in to help build up the atmosphere, enhanced by loud music from the likes of Tom Jones and Jonathan Richman. And the £15 a ticket night was sold out, even though there were a few empty seats at the start, which puzzled compere Rob Auton, pictrured below, one of the key members of the Bang team. One late-arriving couple, asked to account for themselves, explained that they’d been for tapas first. 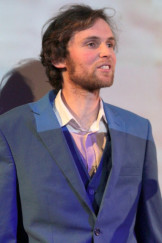 A typical Bang night is a mix of poetry from the regulars, guest poets and open micers, interspersed with fun and games along the way involving the Bang hat, balloons, a seriously blown-up picture of Cliff Richard, and the Golden Gun award.

Bang gang members Martin Galton and Laurie Bolger kicked off proceedings. Each asked for some audience participation; Galton for a decision on whether he would read from his love or hate books. The audience opted for hate, and were given ‘Old Bastards’ -  “People gagging for a cup of tea … people who remember Opal Fruits … people whose ears are hairier than their heads … old bastards.” Bolger received a thumbs down for another love poem, so delivered a severely disapproving one about a tarted-up boozer in Shoreditch instead.

Guest poet Kat Francois, pictured right, checked out the audience for diversity - “One brother in the corner, a couple of slightly brown people” – and then roared into affirmative poems such as ‘Ba Dam’, about a black woman’s confident walk, “inviting mango calves … a palm tree swing in her hips … her rear has a rhythm of its own”. She teased the audience for its wariness as she introduced a poem about thick lips, then teased them some more with ‘White Boy, Are You Fucking Crazy?’, with its twist in the tale.

Second guest Jess Green’s poem ‘Dear Mr Gove’ went viral on YouTube, and she has just finished her Burning Books tour, which features other poems that focus on the damage done to schoolchildren and teachers by the know-nothing Gradgrinds in government. Green, pictured left, has no more time for Gove’s successor as education secretary, Nicky Morgan, in her poem ‘Held Back by Nicky Morgan’ . It was just a pity that some of her words were difficult to follow in her quick-fire delivery. She finished with ‘Friday Night’, a moving and very effective poem about the Paris attacks. She also delivered her own verdict on Bang Said the Gun’s new home, saying at the start that she felt it was “more intimidating”, but concluding at the end that she was wrong – it wasn’t so intimidating after all.

The fellowship of a Bang Said The Gun night was emphasised by the emotional farewell given to long-time Bang gang member Peter Hayhoe, bowing out after a sterling stint. He said goodbye with one of his plaintive poems from Penge.

And we mustn’t forget a key highlight right at the end of the evening – the search for the Golden Gun winner at the Raw Meat Stew open mic. The rules are one poem, two-minute slots, sign up in advance. The man with the Golden Gun was Michael Clarke, with his take on Paul’s letters to the Corinthians, a lot more entertaining than it perhaps sounds. Other powerful and entertaining performers were Lettie McKie and Mary Dickins. Another contestant in a very strong field was Manchester’s Dave Viney, who with fellow open mic contestant Thick Richard will be hosting a relaunched Bang Said the Gun Manchester on 28 April - its opening night guests are Luke Wright and Ian McMillan.

Meanwhile, will Bang Said the Gun thrive in its new theatre setting in London? As head gunslinger Dan Cockrill explained before the show, after many years of organising weekly nights, and with an additional back-up team in place, it seemed a logical step. Certainly the move can be seen as testament to the growing popularity of spoken word, as well as the drawing power of Bang’s brand of stand-up poetry, teetering on the edge of anarchy. It’s a party for grown-up kids, and after just a few minutes you can feel a smile spreading over your face. And however noisy it gets at times, there’s always a proper hush when the poetry is spoken.

Jess Green's poetry certainly strikes a chord with me, Steve, as the husband of a primary school head who has packed it in early, in despair at the destabilising edicts from the likes of Gove and Morgan. If you didn't know better, you would say that they are out to wreck the state school system. No, delete the first part of that sentence. I'd also like to say thanks very much to the Bang team for being so warm and welcoming on the night.

A great article, Greg. And thanks for the link to Jess Green's poems – I hadn't heard her poem to Nicky Morgan. Wonderful stuff!