Cocktail of sun, sea and Sheffield provides joyous mix at the Troubadour 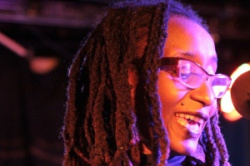 Mix ingredients from the Caribbean with a pinch or two from Sheffield and Derbyshire. Think of love, death, and a day spent at home instead of going to work. Three poets -  Malika Booker, Peter Sansom and Paul Maddern – linked up at the Troubadour on Monday night when they took part in What We Should Have Said, responding to each other’s themes and ideas with poetry that passed on the baton, and was interspersed with the offbeat thoughts of ringmaster Stuart Silver, plus the thoughtful, jazz interventions of Huw Warren on keyboards.

Thus Bermuda-born Paul Maddern, now living in Ireland, talked of mangoes and blue pools, while Peter Sansom, co-editor with his wife Ann of The North magazine, and Smith/Doorstop Books, spoke of listening to the rain, “a real downpour”, and trying not to feel “I should be doing more with the day/ than the nothing I did instead of going to work”. Malika Booker, who will be chairing this year’s Forward prize judges, dreamed of her grandmother hearing her perform poetry: “Each word from my rustling page meets/ your little nod. You are virgin audience,/ who never saw me read.” 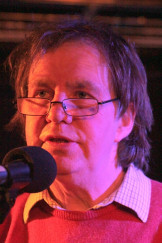 Sansom, pictured left, referred to another sense of loss – “You couldn’t call it grief” – in ‘Autumn Term’, where he mourns the passing of a certain time and of “picture books/ more colourful than life can stay”. His wry, downbeat words constantly had another packed audience at the Troubadour chuckling, as in his cross-country travails, “the sport of also-rans … a lifestyle along the byways/ Of couch grass and abandoned railways”.

He had been prompted into this elegy to the days of running “like water through mud” by Stuart Silver, who devised this popular format, and who told a long story about swimmer Sharron Davies apparently visiting his school and being photographed with every pupil – even though "she couldn’t stay long out of water" – before it transpired that the celebrity had actually been a bronze medal-winning ice skater, “inspiring all the children in my school to come third”. Booker, “raised in London soil and Guyana sun”, spoke of strong women who didn’t believe in coming second best, and of their various remedies – pepper, boiling water, knife, cutlass - to make sure that if a man hit you, he wouldn’t ever do it again. 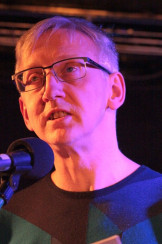 There was a brief spate of extremely short poems, traded between Maddern, pictured right, and Sansom like blows. Booker aimed another at a lover and his “little black book” in ‘Faded Slippers’. Sansom’s litany of domestic disaster, ‘You have Been Gone a Fortnight and the House’, included these lines that had the audience rocking: “I’ve read Finnegans Wake/ a page at a time for five years with a group/ of like-minded individuals. By the time/ I finish it I’ll be dead.”

Maddern’s locations are far from Sansom’s rainy “Alps north of Shipley” settings. ‘Bodysurf’ from the A Beachcomber’s Report collection gives instructions on how to “be absorbed and pulled along,/ so someone watching oceans from a towel/ might raise herself a little on one elbow/ and to her partner whisper, Dolphins.” In ‘Faith’ Booker provided a eulogy for a dying, stoical relative: “I want to write calypso hymns, folk hymns,/ reggae hymns, joyous hymns,/ I want to write sweet hymns for you.” This unrehearsed, geographical mix and match recipe really worked. Vive la difference.

Coffee-House Poetry’s organiser Anne-Marie Fyfe said it was good to see that so many of the prizewinning poems read out during the evening had now appeared in published collections. This year’s Troubadour prize judges are Glyn Maxwell and Jane Yeh, and the deadline is 21 June.

'Taking the poem inside you': pupils battle it out for place in Poetry By Heart finals ►