by Attila the Stockbroker 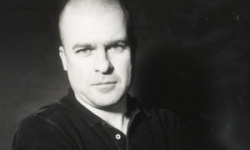 Just about to leave for Glasto on a Thursday morning, one final e-mail check...among the spam was a message from my footie mate Alan. Title: 'Have you seen this?' I open it and find a link to Philadelphia Weekly and the article: 'In extremis: Steven Wells says goodbye.' Oh, fuck, fuck, fuck.

Two days previously I'd emailed him a poem I'd just written. Must have arrived in his inbox hours before he disappeared off this earth.

Swells, I always thought you'd pull through. I'd read 'The English Patient' - your brilliant, witty, moving piece about your simultaneous battle with cancer and the US healthcare system - in the Weekly, swapped emails where you sounded as, well, Swellslike as ever and thought: you'll make it. This is one roaring, iconoclastic, larger than life, indestructible, stupidly clever, logically illogical everything-demolishing mouth monster who won't be demolished himself by something as mundane as cancer. But no. Seething Wells is dead. 'Swells' and 'dead' in the same sentence. We're all going to die, sure - and our biological health dictates when, not our brain, our spirit, our love of life or our capacity to write verse with the caustic power of concentrated sulphuric acid or prose which immolates crap rock bands, pompous sports stars or anyone else we feel like taking on - but...oh, fuck.

There have already been some fine tributes, mostly from his music journo friends. Here are my memories, and they start at a slightly earlier time. Despite his long 'career' (he hated that word!) in music journalism, Swells was first and foremost a poet, and then some, whom I'd first heard in 1981... I'd christened myself Attila the Stockbroker and had started getting up on stage performing energetic political poems between bands. He wrote to me, enclosing his fanzine Molotov Comics, saying he was doing the same up in Bradford, and so were some friends of his including Little Brother, Joolz and Slade the Leveller, from a then unknown band called New Model Army. He called it 'ranting poetry' and from the moment I heard the phrase so did I. Incidentally, Seething Wells is (or at any rate was) the site of a sewage farm near Surbiton. A great choice for a stage name!

Our first meeting was performing on the back of a lorry at a Right to Work demonstration in London in November 1981. Coincidentally, Paul Weller was headlining a poetry event at the Young Vic theatre that night and I persuaded Swells to come and 'crash' it with me and try and blag a few minutes. Organiser Michael Horovitz, bless him, gave us ten between us and the audience loved it. So did Paul Weller - two weeks later we were supporting the Jam at Hammersmith Odeon. NME editor Neil Spencer was there to review the gig and was impressed as well, sending budding writer and soon to be Redskins leader Chris Moore to do a big review of us at another gig a few weeks later. A music press 'ranting poetry' fad was born. And so was a pugnacious punk poetry partnership...

Swells and I did an EP together, 'Rough Raw & Ranting', which hit the indie charts, then a book for Unwins 'The Rising Sons of Ranting Verse' and for the next few years we saw a hell of a lot of each other. We gigged together, wrestled, drank, argued, and shouted together, watched bands together, went on demos together. But underneath the roaring exterior (and many people will be astonished by this) Swells never really enjoyed being on stage: many is the time I remember him throwing up before we tackled an audience. I guess it was this, plus his realisation that he could reach many more people writing for papers like the NME than as a ranting poet, that made him make the transition, first to Susan Williams, social surrealist feminist rock critic (many fell for it!) and then to the Steven Wells loved (by bands he liked) loathed (by bands he didn't) and feared (by bands who didn't know whether he was going to like or loathe them) everywhere.

I carried on being a poet, but we kept in touch as the years went by and every time we met the same roaring, hyper-opinionated clash would ensue. I'd take the piss out of him for choosing nerdy trainspotteresque behind-the-scenes music hackdom as the vehicle for his scattergun obliterations of everything Middle England held dear rather than getting on stage and doing it in front of a live audience like what a REAL stroppy bastard would do. He'd take the piss out of me for stubbornly carrying on being a ranting poet despite the fact that the entire collected ranks of nerdy music hackdom he hung around with thought ranting poetry was FINISHED and RUBBISH and that everything to do with Attila the Stockbroker was complete and utter DOG FAECES. We'd agree to differ.

Then we'd smile, get pissed and wrestle with each other. And slag off Morrissey.

In the 90s I tried to coax him out of retirement and instigate the Seething Wells Comeback and got as far as booking him for a gig at the performance poetry series I was running near Brighton - but he phoned a couple of days before to cancel. So I gave up that idea and just enjoyed his demolitions of shit bands, shit football and shit politics in all the publications that would have him. (Plus the humanity, insight and above all the supreme intelligence which imbued all his writing - but I never told him that bit...)

The last time I saw him was by chance - he was a loud Swellsian vision in a pink satin suit by the Thames as I walked through London with my wife - and stepchildren-to-be. 'John! John! John!' Then he moved to the States to be with Katherine, the woman he loved, and our occasional contacts and spats became more occasional and less memorable - apart from anything else it's impossible to wrestle via e-mail. For a couple of years, silence.

Then, one day in 2006 I thought 'I wonder what Swells is doing now?' Googled him. To my shock and sadness the first thing I found was the 'English Patient' article, and I got back in touch and stayed so to the end. A month ago I was congratulating him on a great piece on the corporate hijacking of football and he was doing the same to me about the football poems on my website (maybe we were mellowing in our old age). Last Tuesday I e-mailed him a poem, 'Dad Rock Antidote Manifesto' which I thought he'd like. Same old Swells. He was up for the battle, that's for sure.

This morning I re-read that last piece he wrote, on the edge of death but so full of life, so stark, so self aware, so unutterably Swells. Then I went to visit my much loved old mum, battling bravely against Alzheimer's, deafness and blindness, saying with dignity and calmness for the hundredth time 'I've had enough, John. I want out.'

Fuck me, life can be unfair.

A far off town and a late night bash
And a double bed was our place to crash
So listen here - ‘cos this story tells
Of the night I slept with Seething Wells!

I didn’t mind - or so I said
But I wish I’d had the floor instead
Cos you’d never imagine the thousand hells
Of a night in bed with Seething Wells….

So I kept right close to the edge of the bed
And I pulled the blankets over my head
But eerie snores and stifled yells
Soon woke me, thanks to Seething Wells

And, turning, I came face to face
With a massive boil in a private place
And a couple of hairy bagatelles
Made me run like hell from Seething Wells!

And I vowed right then that if need be
I’d spend the night in a cemetery
Or sleep with dogs, or DEAD GAZELLES
But never again with Seething Wells!

Atilla, I have never read Swells, now I will.
Your poem made me smile, your thoughtful tribute made me sad, but also brought home the vital role poetry plays in connecting people.
I hope your brave mum finds the peace she desires. x Carol

I heard you announce this at Glasto and was shocked and saddened. My sympathy that you've lost a friend,

Swellsy, mate - thanks for the memories - many years of great writing. RIP.

I'm gutted to hear this news Attila. I saw him only once, sometime in the 80's when I was a student at Liverpool University and he gave a fantastic gig in the Student Union basement bar (the Sphinx Bar it was called then.) He was the first of the "punk poets" I ever saw live, and I think think he started me off on a journey that I continue to this day. I think of your good self, John Cooper Clarke and Seething Wells as a sort of unholy trinity of punk poetry. Although I've watched you and JCC on several occasions over the years, I've often wondered - what happened to Seething Wells? Now I know. Farewell Seething Wells! You were great.