Competition closes in 18 days, 21 hours. Get details and Enter. 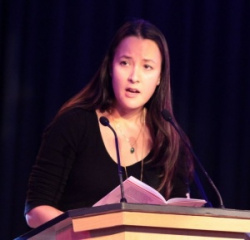 A row has erupted over this year’s winner of the £20,000 the TS Eliot Prize, with the long-running satirical magazine Private Eye querying the award to poet Sarah Howe for her debut collection Loop of Jade, and a respected poetry blogger, Katy Evans-Bush, defending the young Anglo-Chinese writer, who also recently won the £5,000 Sunday Times young writer of the year award, and was shortlisted for the Forward best first collection award as well.

In its latest issue Private Eye wonders - in its Books & Bookmen (sic) column - if Howe had triumphed at the TS Eliots because she was a “young woman with a dual Anglo-Chinese heritage” and could be seen as “a more presentable ambassador for poetry than the distinguished grumpy old men she saw off”.  It also pointed out that the TS Eliot Prize organisers, the Poetry Book Society, had neglected to include Loop of Jade as one of its poetry selections.

Before the winner had been announced, Write Out Loud’s reviews editor, Frances Spurrier, had described Howe’s performance at the TS Eliot readings the previous evening at the Royal Festival Hall as “spellbinding” and “remarkable”.

Howe’s win is the first time a debut collection has won the TS Eliot Prize. The chair of the TS Eliot prize judges, Pascale Petit, said: “In a year with an incredibly ambitious and diverse shortlist, it was difficult to choose the winner. However, Sarah Howe's Loop of Jade shone with its startling exploration of gender and injustice through place and identity, its erudition, and powerful imagery as well as her daring experiment with form. She brings new possibilities to British poetry."

On the Guardian’s poetry website, Katy Evans-Bush said Howe’s critics were “damning a 30-something woman for having won a major book award … They don’t like it. One well-known male poet summed it up perfectly on Facebook: ‘Someone’s taken away their ball’. “

Steven I was referring to weight of numbers rather than a very few specific individuals. You will be pleased to know that I have indeed heard of the poets you mention. As regards to your male testosterone point - I rest my case.

staggered no one has mentioned plath, dickinson, angelou

They were always there. They were just hidden by the fog of male testosterone...

Poetry has had its female burning lights: Rossetti and
Meynell come to mind. And there are others who conjure
up delights like The Little Waves of Breffny (I stand to be
corrected on the title but that's OK).

Immortality in women's poetry? If only there had been the women poets available for history to make a decision about immortality. That may change in decades to come.

Helps if you're already a distinguished academic, I suppose.

I would value Gray's "Elegy in a Country Churchyard" in
terms of the sum mentioned and more...and I wonder if
anything produced by this young lady will similarly
survive the test of time to immortality in the same way?
It would be certainly justify the payday and prestige she is enjoying in today's world of poetry and its rewards for the
chosen few.

she deserves it for tame alone. the whole collection is really interesting and tame is just stunning. people like to argue though i suppose. maybe private eye should boycott the oscars.