Not in this World: Tracey Herd, Bloodaxe 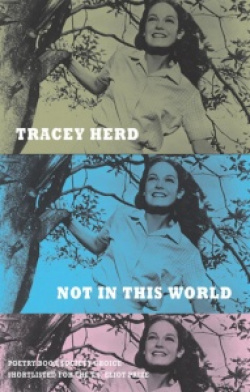 Not in this World is an impressively readable collection of poems about loss and pain, where the poet expresses deeply personal ideas and emotions while avoiding self-revelation.

Tracey Herd is a Scottish poet, born in 1968, who took English and American studies at the University of Dundee, and afterwards remained based in that area. Not in this World is her third collection published by Neil Astley at Bloodaxe Books. Her first, No Hiding Place (1996), was shortlisted for the Forward prize. Her second, Dead Redheads (2001), was a Poetry Book Society recommendation, and Not in this World was another PBS pick. It is also on this year’s shortlist for the £20,000 TS Eliot prize for poetry, alongside poets such as Les Murray, Claudia Rankine, and Don Paterson.

This carefully-structured book opens with ‘What I wanted’, where a young child looks out at a “plump,/ bountiful landscape of snow” which offers mystery and adventure, with “tracks that led off as far/ as a child’s eye could see,/ and then a little further.”  It ends with ‘Calling Card’, a eulogy for a young American writer who died in a car crash shortly after graduation, and whose broadcast words she imagines “up there with the stars,/ still travelling outwards/ with the occasional earthbound sigh.”

Writing in the Poetry Book Society Bulletin for winter 2015, Herd says it is the “distance which is both invisible and unknown” that engages her: “The poems lie somewhere in this barely visible distance. It is a book of coldness, blizzards and, above all, loss. During the last 14 years I have lost friends, words, the ability to express myself, faith (in the secular sense) and sometimes even the desire to care about any of this.” Yet the “desire to express myself and craft poems proved far stronger than the reluctance to write about certain subjects”. Herd concludes: “This book contains poems of hope and warmth alongside the icy sense of loss and despair. As with all words flung out into the universe, you can interpret that as you wish … there is never only one meaning.”

The carefully sequenced poems in Not in this World tell stories that handle strong and painful emotions. Often Herd takes the matter of her poems from figures in popular culture. Meaning is constructed from the lives of glamorous people, real and fictitious.

In ‘Vivien and Scarlett’, ‘Norma Shearer’, ‘Joan Fontaine and Rebecca’ and ‘Olivia de Havilland’, Herd asks the reader to enter into a world of complex relationships and feelings played out within her vision of Hollywood.  The opening lines of ‘Joan Fontaine and Rebecca’ run: “You were never given a name of your own. The dead had a name,/ Rebecca …”  At first sight this refers straightforwardly to the unnamed protagonist of the book and film Rebecca. Beyond this, Joan Fontaine, who played the lead role, was the younger sister of Olivia de Havilland, and was forbidden to use the family name in her acting career by their mother. The following poem, ‘Olivia de Havilland’, explores relationships between sisters.

Referencing the same period, near the end of the collection a sequence of four poems focuses on the death of Buddy Holly, Ritchie Valens, and two others in the 1959 plane crash, later commemorated in the Don McLean song American Pie.

The ‘I’ of the narrator in this collection is not to be lightly identified with the poet. In some first person poems, such as ‘Little Sister’, Herd obviously speaks through a persona. In a few, like ‘The Unicorn Seat’, there seems to be no reason for invention.

The rest lie in between, but Herd’s writing is strong enough that questions of authenticity rarely arise. In ‘Happy Birthday’ the pain of a mother’s continuing grief remembering a late abortion is so vivid that the question whether it originates in empathy or personal suffering becomes irrelevant: “Every month, I lie like a broken mannequin/ … I know why I bleed./ You were scraped away like unwanted food./ Look at you lying there in your little glass coffin,/ or is it a snow globe? Were you terribly cold?”

Will Not in this World win the 2015 TS Eliot prize? Our reading group, the Indian King Poets in north Cornwall, was divided in their opinions about the book. Some readers responded strongly to the use of popular culture, and found Tracey Herd engaged them emotionally by building on the iconic. Others were less impressed, thinking some poems verged on being empty or sentimental. But we will all have to wait until 11 January to find out which collection the judges have chosen to win the £20,000 prize for 2015.

◄ 'Light larking between wind and current will be in this sweater'