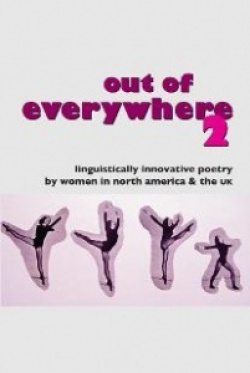 One of the seminal anthologies of non-mainstream poetries of the late 1990s has to be the first Out of Everywhere anthology, edited by Maggie O’Sullivan. It’s a brilliant collection of various poetries by women, combining American and British experimental poets and making a wildly expansive vista of possible poetries from the “concrete” and “visual” poetry of Paula Claire to the intense difficulty of Hejinian’s Language poetry.

This is the second instalment, and whereas the first had some difficulty finding British women poets who were experimental (seven out of 20-odd) this book is not only bigger in size but in range: 20 out of 43 are British. And off the top of my head, I could probably name a further dozen who are not in the anthology that, space permitting, possibly ought to have been.

Experimental, linguistically innovative (the anthology’s preferred category), avant garde, such terms need some explication for readers of Write Out Loud; but it’s not an easy thing to describe. What you won’t find here is rhyming poetry, or poetry of the personal epiphany. It’s not “spoken word” either. The writers use techniques such as juxtaposition, collage, montage, extrapolation, visual spread across a page, prose poetry, to delay any easy understanding; in order to create a space for the reader to see the world differently. For instance, Holly Pester’s ‘Buddyhollyonmyanswermachine’ takes a scalpel to the song Peggy Sue, replicating the repetitions and mishearings of a song on the radio. It’s impossible to quote from without diminishing it, and is an example of ‘performative writing’, written with live performance in mind; but not the usual ‘spoken word’ kind:

Other writers I enjoyed in this collection of often wild experimentation include Zoe Skoulding, Carol Watts, Amy De’ath and the short emblematic poems of Sascha Akhtar:

But there is so much in this anthology that is worth exploring, for those who are prepared to open themselves up to ways of thinking and doing poetry that go beyond the mainstream. I also liked Kaia Sand’s poem about the internment of the Japanese in world war two America, which starts with instructions on how to arrive at the poem.

For me, this is an important anthology, because it shows just how far experimental women writers are taking poetry. There are a lot of ideas and possibilities in this writing, and I can’t say I follow every writer, or always understand everything that is going on. Mainstream poetry often seems to be telling me things I already know in nice language; but this is expanding my mind into new areas so it’s bound to sometimes confuse.

The editor, Emily Critchley, and the publisher, Reality Street, are to be praised for this anthology. It’s not ever going to appeal to everyone, but that’s ok. If you choose to plunge into the deep end of this poetry, you’ll find a lot of strange creatures swimming about but also a lot of beauty and thought, coming from the everywhere that is poetry.

Out of Everywhere 2, edited by Emily Critchley, Reality Street, £15