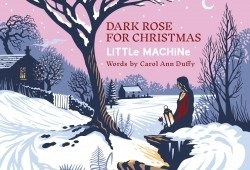 Could poetry provide a Christmas hit this year? The poet laureate, Carol Ann Duffy, has teamed up with Little Machine, a trio of musicians that sets famous and contemporary poems to music, to create Dark Rose for Christmas - 10 album tracks of Christmas poems with musical settings. Little Machine have already added music to a number of the poet laureate’s poems – she has in turn dubbed them “the most brilliant music and poetry band in the world”.

As Little Machine – Chris Hardy, Walter Wray, and Steve Halliwell – explain on their website: “Last year Carol Ann suggested we create musical settings of the Christmas poems she had written for the ‘Twelve Poems of Christmas’ series published by Candlestick Press over the last six years. We composed six settings and performed them at Edinburgh’s Festival Theatre Studio and live on the BBC Radio Scotland Arts Show with Janice Forsyth in December 2014.

“The original set consisted of ‘Advent’, ‘Christmas Eve’, ‘The Mistletoe Bride’, ‘December’, ‘The Single Bed’ and ‘The Bee Carol’, and the songs were so well received that the idea of the Christmas album was born with the poet laureate agreeing to write four new ‘lyrics’ to meet our demand for the standard 10 album tracks. Carol Ann actually gave us five brand new ‘songs’ to work on: ‘Elvis’, The Lord of Misrule’, ‘Oh Hogmanay’, ‘The Lineage’ and ‘Dark Rose for Christmas’ which became the title track.

“We spent the summer honing the arrangements and recording at Hotel Zulu studios in South London with our own Steve Halliwell in the producer’s chair. We were delighted to have the assistance of trumpet and whistle wizard John Sampson and the choir of Emanuel School in Battersea in creating a piece of festive magic, a future classic and the first album ever penned by a poet laureate.”

Is it time for a change from Slade at Christmas? Could one of these songs be pulled from the album to provide a surprise Christmas chart hit? Contenders could be ‘The Lord of Misrule’, a rollicking number with a definite Ian Dury flavour; ‘Elvis’, in which an imaginary young Elvis Presley turns up the doorstep to sing a carol; and ‘Oh Hogmanay’, a cheery refrain to see in the new year.

Little Machine will be performing at a number of forthcoming Christmas shows with Carol Ann Duffy, including Cambridge winter literary festival on Saturday 28 November, Manchester’s Royal Exchange on Monday 14 December, and Nottingham University on Tuesday 15 December.

Many thanks for the tip about this group. As you say, Greg, their work is excellent. Coincidence, I suppose, that I was reading Housman's poem only this morning, unaware of its treatment on this CD. I had also read the Yeats poem this morning, The Irish airman foresees his death, and it too is on the CD.
It is part of our raison d'être to bring more people to poetry, so our promoting this CD via the news pages seems spot on to me.
Like Graham, I am always hesitant to look at poetry CDs, so having this testimonial has opened my ears/eyes to the possibilities.

Interesting stuff - my own project THE CROWS OF ALBION attempts to merge my own poetry with musical backings / soundscapes - I also released a 21 track CD last year commemorating the full chronological history of WW1 - as a comparison piece here is my take on 'Anthem For Doomed Youth' from that album - which commences with my own sonnet remembering Wilfred Owen - if anyone wishes to hear more examples they can be accessed from the link. Similar idea - similar project - I will follow with interest :-)
https://soundcloud.com/the-man-at-the-back-1/death-of-a-poet-anthem-for-doomed-youth

I've written this as a news story, rather than as a review, but I do have a copy of the CD and it's excellent, Graham. If you've never encountered Little Machine before, you should certainly give them a go. It's more than a cut above your average Christmas musical output, particularly the tracks mentioned. I have an earlier CD of theirs that I play a lot, which includes a very moving version of Wilfred Owen's 'Anthem for Doomed Youth', and a joyful punk version of Larkin's "They fuck you up ..." If however, just mentioning the poet laureate's name makes you choke on your sprouts, they did also release a CD of six poems with a world war one setting earlier this year, called A Blackbird Sang http://www.little-machine.com/news/cd-a-blackbird-sang-ww1-poems/

I'm in two minds about this. Half of me thinks what a good idea, a recognized poet's words set to music. Then the other half frowns and thinks it's just a Christmas gimmick and yet another, more commercial vehicle for CAD!
Hard to judge?