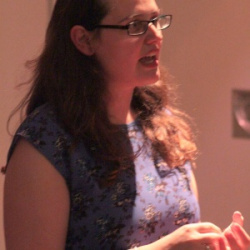 What are your seven favourite “desert island” poems? A poetry group is asking the public to send them their favourites before a poetry event next month. On 3 December, Live Canon, a group of actors that perform from memory the “back catalogue” of poetry across the centuries, will be appearing in Desert Island Poems at Made in Greenwich Gallery in south-east London. In the first half of the event, Live Canon's artistic director, Helen Eastman, pictured, will be in conversation with poet and novelist Blake Morrison, as he chooses and discusses his seven favourite poems. Each will be performed by the Live Canon ensemble. In the second half of the event, Live Canon will perform the top seven poems chosen by the public.

Helen said: “We'd love it if you could visit this page on our website, and fill in the form to tell us your top seven poems. We'll be logging all the suggestions and working out the seven most nominated poems.” The deadline for filling in the form is 16 November. Live Canon also plan to publish the results of the public poll, after the 3 December event.

If you would like to book tickets for the event, you can do so via the Made in Greenwich website.

What are YOUR favourite seven poems ? Tell us here on Write Out Loud as well!

Background: Relax, and listen: poet takes a back seat

Desert island poems- is that when you only get to read one third of the verses? Tommy