Poet's tribute to women pilots who ferried planes in the war 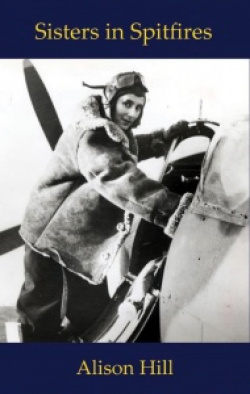 A poetry collection that celebrates the women who flew with the Air Transport Auxiliary (ATA) during the second world war, ferrying all types of planes from open cockpit Tiger Moths to Wellingtons and four-engine bombers, will be launched early next month.

Alison Hill’s Sisters in Spitfires, published by Indigo Dreams and supported by the National Lottery through Arts Council England, pays tribute to the 164 women from over 25 countries who shared an enduring love of the Spitfire in particular. The collection recalls some of their stories, their press coverage, and their vital role in the war. The collection will be launched on Thursday 5 November at the Landmark arts centre in Teddington, with vocal harmony trio the Spitfire Sisters also performing.

Explaining how she came to write the poems, Alison said: “I was intrigued to find out more about the women ferry pilots of the Air Transport Auxiliary (ATA) when I came across a copy of Giles Whittell's Spitfire Women of World War II (HarperPress, 2007), a lively account of the 164 women and four flight engineers who served in the ATA during the war. Before I'd finished reading the book, I'd had the idea of a poetry collection to bring their stories and voices together, particularly in a year of anniversaries in 2015.

“The poems took shape over a series of focused writing breaks, and, perhaps due to the nature of the theme, were all written outside. I spent a weekend in Tunbridge Wells, home town of Pauline Gower, the driving force behind the women's section of the ATA and used her father's 30 scrapbooks bequeathed to the library to enrich my research - Sir Robert Gower MP's chief interests were politics, animal welfare and his daughter's flying career, which began in an air circus.

“I also spent time at Maidenhead Heritage Centre, home to an extensive ATA archive and a Spitfire simulator; and at Brooklands Museum library, where one of the long-term volunteers had met Diana Barnato Walker (on the cover) and other pilots who trained and flew from there. I spoke to pilots Molly Rose and Joy Lofthouse, now in their 90s, who sounded as spirited as they would have been in their 20s and full of memories, with a particular fondness for Spitfires. I made other aviation connections and collected as many autobiographies as I could find and was particularly pleased to acquire a copy of Pauline Gower's Piffling Poems for Pilots, edited by her son Michael Fahie, first published in 1934. The style of these books matched the women's matter of fact stories - they had a job to do and they did it, but on the whole they all loved flying.

“At a reading at White Waltham airfield, which was the headquarters of the ATA during the war, I met Candida Adkins, who gave an entertaining talk on her mother, pilot Jackie Moggridge who won her RAF wings after the war and hoped to break the sound barrier. Candida gave me copies of her mother's poems and was delighted to hear about the collection - I sent her 'Remembering Jackie' as it had been written with her memories in mind and she liked it, especially as Jackie wrote poetry herself, and was a creative and fearless women.

“In July, I won a biplane flight in a school auction - by coincidence from White Waltham. A half-hour flight made me appreciate the women's courage and resilience even more - at the start of the war they had to fly regularly to Prestwich and Lossiemouth in open cockpit planes (usually Tiger Moths), travelling back on dark, cold overnight trains to fly again the next day and the next. ATA pilots had no radio or instruments and were at the mercy of the British weather and enemy aircraft. Most fatalities (16 women) were due to bad weather or poor visibility. But the women's spirit shone through their accounts of wartime flying and the Spitfire was a firm favourite, with its snug cockpit and manoeuvrability, was definitely a 'woman's plane'.”

Alison added: " "The music I took on my writing breaks was 100 Hits - Wartime Memories including Vera Lynn (The White Cliffs of Dover), Jack Hylton (Painting the Clouds with Sunshine) and Jack Buchanan (Everything Stops for Tea) - spirited songs that kept me in the mood!"

Today, on Friday 23 October, Warren Mailley-Smith will be giving a Complete Chopin Solo Piano Series concert at St John Smith's Square in London, and a poem from Sisters in Spitfires, 'Out of the Silence Came Chopin' appears in the programme, as the Revolutionary Study mentioned in the poem is part of Warren's repertoire. Alison Hill is also taking part in the Spitfires and Seagulls event in Southampton on Thursday 29 October as part of Southampton's first literary festival, SO: To Speak.

Kultura, a literary salon in the land of Tod ►

An excellent choice for a theme for a collection of poetry.
The recent TV programme on those daring and dedicated
young women pilots had me nodding and smiling in
admiration - with the survivors mirroring their young
selves in demeanour and pride in their fraught wartime
occupation. God bless them.
This takes inspiration from John Pudney whose spirit,
I'm sure, will excuse my fond plagiarism in a good
cause.

No need to ask her why
Jenny-in-the-sky
She loved the engine sound
Beyond Jenny-on-the-ground.

She sung along aloud
Jenny-in-the-cloud
To dry her grieving tears
And overcome her fears.

This will be a great read, Alison has worked to. bring these women's experience to life in poetry . Looking forward to getting my copy.