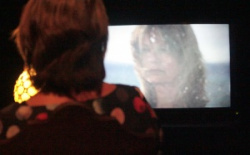 An award-winning , multimedia poetry production is being performed in a short run at London’s Cockpit theatre  – and I recommend that you see it, if you possibly can. Zones of Avoidance by Maggie Sawkins, which won the Ted Hughes award in 2014, deals with a daughter’s drug addiction and the baby that she had to give up for adoption, interlaced with the testimonies of recovering addicts.

I knew the poetry of this story well, having reviewed the book, but this was a chance to see how it could be given another dimension, and whether shifting away from a conventional reading at a lectern adds anything to its meaning and impact.

The answer, as you might hope or expect, is yes. This is a powerful and poignant narrative, told with honesty and a lack of sentimentality, and with great poetic craft and skill, and it is enhanced and broadened by the effects that this “live literature” production directed by Mark C Hewitt brings to it.

Sawkins does indeed deliver some of the poetry from the lectern – but she also moves away from it to sit in an armchair and don a festive hat to recount the story of a Christmas disrupted by “Sunny Girl’s” volatile behaviour. She later sits at another table to watch a TV that shows a grainy version of herself, and pours herself a glass of wine before writing a heartrending letter, ‘Dear Boy’, to her grandchild – the moment that concludes the performance.

Along the way the disembodied voices of recovering addicts add their own stories. Sawkins begins by relating her own flirtation with drugs, after introducing her story: “I’m reading The Confessions of an English Opium Eater - / I want to what drive my daughter out in the snow // with no coat or socks, in search of a fix”.

There follows the story of Sunny Girl and her Davy Crockett hat, accompanied by occasional blurry, bleached-out shots of the front at Portsmouth, as though the photographer had got too close to the sun, and the rueful notes of a steel guitar.

A momentary image of Michael Fish appears on the big screen before ‘The Night the Trees Fell Down’ and Sunny Girl ends up in hospital, having her stomach pumped; there is a visit to a hostel that includes some of the funniest and well-crafted lines I have ever come across, involving Pablo Neruda and a conger eel;  and the moment the nurse asks Sawkins to cut the cord of her daughter’s baby.

The production includes these moving lines, written by Sawkins to her adopted grandson: “Boy, you were the son of sleep and the brother of fantasy. One day you will make someone else’s dreams come true,” and concludes: “Soon it will be your first birthday. / I will light a candle and make a wish.”

Video artist Abigail Norris and musician Nick Evans deserve credit, too. This production has maybe not had as many showings as it deserves.  It continues at the Cockpit theatre with a matinee performance on Wednesday 30 September, which will include two recovered addicts taking part in a discussion panel, as well as in the evening, and on 1 October as well.

Messages from inside: poetry and prose, art and animation from Koestler award winners ►

It was a production that lingers in the mind afterwards, Maggie. Well done to all concerned. Yes, I'm looking forward to seeing John Agard perform in Portsmouth!

Thanks for coming along Greg and for the early morning review. Much appreciated. The after show discussion on Wednesday went really well and it was good that Dave and Kieran from PUSH Recovery Community were there.

Looking forward to seeing you for John Agard's Roll Over Atlantic at The Square Tower.