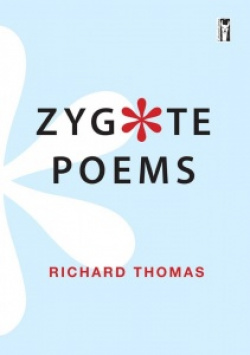 In the title poem Richard Thomas opens this collection by introducing the “poppy seed” that will become his daughter, Emmeline, “making itself at home”. The size comparison of a six- or seven-week foetus to a baked bean may well be familiar to parents, but he extends vegetable comparisons of the size of the new person growing from zygote to full-term baby with a playful and genuinely wonder-ful inventiveness.

The collection moves through the daily realities of baby milk, first teeth, first shoes, including questions of where to live and concerns about money, on past a first birthday, and ends with the graceful benediction of ‘These Things I’ll Teach You’.

This is Richard Thomas’ second collection with Cultured Llama, and his work has appeared in magazines. The cover blurb speaks of  “a father’s journey” and “young fatherhood”. The more cynical reader might fear sentimentality, egotism, and male/female point-scoring. This book avoids all these.

The poems don’t avoid strong responses to the love a parent feels for their child, but express them with honesty and humour. A description of the first scan, described in ‘Onscreen Debut’, starts” “You were a memorable jellyfish / of such wholesome form … “ and ends “Baby, when you made / your onscreen debut, / the grass was freshly cut, /and the lambs were jumping outside my window.” The description of holding his newborn daughter in ‘Exacting It’ is gracefully intense:  “How to make Yung man weep: / hold you, / My fleshed radiator of love, /so new yet / so familiar, / the exact eyes / of my imagination …”

The low points are also celebrated. For example, there’s Advice on ‘Changing the Morning Nappy’, where “The Sehvyn AM nappy is straight forward, / and I’ve learnt to do it as so she doesn’t notice: …” while the next nappy change is “a completely different thing …”.

Towards the end of the collection, sadness underlies the work as the complexities and difficulties of the world beyond the tight relationship of father and daughter takes its toll. ‘Tu Rooms, Pt 1’ looks for a rental:  ‘It was to have Tu rooms somewhere fairly central / but with a brilliance of trees and daisy caves for picnics … For the five hundred mark there must have been something surely reminiscent of all these things, if not exact, or a Wonn bed basement flat would do it … and that would tide us over until we found the Wonn proper family home.”  ‘Tu Rooms Pt 2’  also holds hopes, though now “… Wonn / bedroom will do to tide us over until I’m / fully qualified in my poesy and earning a steady / coin-flow … it’ll be a home away from her usual home for the weekends.”

‘Finance’, ‘MDEC’, and ‘Surtralleene’ speak to the pressures on this young father, without shifting the focus of the book to him rather than his relationship with his daughter. A blog piece published on the Huffington Post explains how the book was written as the final year of a BA in English and creative writing at Plymouth University, but “mid-writing, my daughter's mother and I ended our relationship - for the best. This suddenly took the collection in a whole new direction I wasn't expecting. It produced new poems which were so in-the-moment that I felt they added to the strength of the collection. You have to take what good you can from everything.”

There are strange spellings. The introduction explains that “the collection uses phonetic language to emphasise the effect anxiety can have on a person during a particularly emotional or mentally taxing period”. As a reader I thought I might find this annoying, but the device was applied skillfully to suit the pacing of each poem, and also gave me a sense of the voice of the poet, which I “heard”, rightly or wrongly, with a west-country softness.

Stylistically Richard Thomas shows experimental playfulness while not appearing too self-aware. He demonstrates understanding of the culture and traditions in which he is working without seeming to be over-knowing. High in his list of ‘Those Things I’ll Teach You’ is  “to tamper with the rubric but know it first / to get best success.” A comparable straightforwardness runs through his handling of the “young father” theme; he brings us the challenge and joy of being the caring parent of a new baby, rather than delivering an analysis of male bonding.

As an object, Zygote Poems is a small softback, pastel-blue cover, reasonable quality paper – and, at £5, relatively cheap. It would sit quite comfortably by the bookshop till to be picked up as a Christmas stocking filler. This is no bad thing; there must be many friends, aunts, and grandmothers as well as harassed young parents who would empathise with the love and truth in these poems.

◄ This is your chance: step right up for the Huddersfield heat of the Commonword Superheroes slam