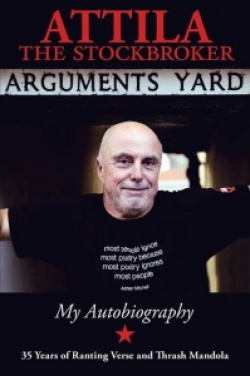 Attila the Stockbroker is celebrating his 35th year of being Attila, and doing it in style with an autobiography plus an extensive and ongoing book launch tour. Released on 3 September by Cherry Red Books, Arguments Yard is not your average autobiography. Attila is not “just” a performance poet, he’s also a trilingual singer-songwriter multi-instrumentalist, with his own band Barnstormer, as well as a political activist and journalist, and he brings it all to the table.

I’m not quite sure what I was expecting - perhaps dense sections of tour dates with the odd tale thrown in, some mind-numbing passages about his footballing obsession (sorry Attila – I loathe football!), or maybe some handy hints and tips for performance poets and other artists.  I wasn’t expecting to find quite so many points of identification with the music and the politics, or the wealth of geopolitical and historical experiences, and I definitely wasn’t expecting to snigger, titter or guffaw my way through all 293 pages, or be shown his most vulnerable and painful memories.  Yes, I know autobiographies are by their very nature self-selecting, but my general experience of them is that they exist to glorify their subject, bathing them in a perfect white spotlight whilst glossing over the bits they don’t want you to know about.  This doesn’t. This exposes childhood vulnerabilities, speaks with pride and tenderness about family, accepts responsibility for causing emotional pain, highlights viciously bad reviews, and laughs about less-than-polished performances and rubbish gigs.  It’s fiercely and refreshingly honest, in the way that poets (and autobiographies) should be.

A rich seam of go-getting do-it-yourself determination runs through the pages too, emphasising an important message for all artists struggling to make themselves heard in a world that thinks the only way is X Factor, on a soul-sucking treadmill of “celebrity”.

Written in a wonderfully non-hierarchical conversational style, it is (as mentioned) hysterically funny, hugely entertaining, and full of surprises. As a performance poet myself of five years standing, I have a small but respectable collection of gig anecdotes. However, over 3,000 gigs in 24 countries spanning 35 years provides an absolute smorgasbord of them.  I think my favourite is the John Cale one, for sheer mortification and gobsmackery. Interspersing the anecdotes are poems and songs reaching back over the years, all teeming with personal and political references.

This book isn’t just about gigs or poetry or music, however. Attila is extremely well-travelled. One of the most fascinating places, from a leftwinger’s perspective, was the German Democratic Republic. Garnered from numerous encounters and many hours of in-depth conversations, his eyewitness accounts of life for the ordinary citizen at that time conflict with the usual propaganda we have always been fed. Coupled with the many references to home-grown political movements and battles he has been involved with over the years, including Rock Against Racism, the Anti Nazi League, the miners’ strike, the print union disputes, Red Wedge, the poll tax and two Gulf wars amongst many others, and it’s hard not to see the book as an almost historical document. I’ve often argued that poets are as important, if not more important, than historians, and my belief was deepened further by the personal experiences described here.

About a quarter of the way through though, I began to wonder how on earth one person would remember the sheer mass of information. The answer was revealed later in the book - he kept diaries. I found this interesting in itself, as I also keep a diary, have done since I started performing, and most of the entries relate to various gigs. Each one really is different.  It was strangely gratifying to read about the most bizarre and deserted gig he ever did, followed by its polar opposite in terms of crowd numbers and reaction.

Attila has a fierce hunger for knowledge, a deep-seated sense of the injustices wreaked against the common people, massive stores of energy and an unstoppable drive to put art out into the world. That DIY aspect extends far beyond his own material, and offers helping hands to countless other up-and-coming artists and peers.  The benefits, the variety nights, all the gigs, events and festivals he’s ever created, organised and promoted have all helped to build other people’s stories, histories, solidarity, and memorable nights out. And that is something special, unique, and priceless in a world obsessed with “celebrity” and corporate identity.

I’m a sucker for a good story, and this is storytelling par excellence. I’ve come away from it with a long, long list of artists and radio programmes that I need to check out, as well as a deep yearning to see ‘Cheryl – A Rock Opera’ performed by Attila and John Otway, before I die.  Perhaps if I ask nicely they might, you never know.

In between the guffaws, the raised eyebrows and the dropped jaws, lies the proof that with a phenomenal amount of hard graft, determination, and rhino-thick skin, not to mention a genuine creative urge and the commitment to see it through, you too could earn your living as a self-sustaining artist.  He may be a thorn in the side to some, but he’s a heroic pioneer and role model to many more, and long may he continue.

Whether you are a fan of his work, either poetry or music, or if you are an artist yourself, I would recommend getting yourself a copy of this. Go to one of his book launch gigs, full list of the 40 date tour on www.attilathestockbroker.com, and you’ll be able to hear the man himself read from sections of it, and perform some of the many poems and songs he has created over the years. Signed copies are available from him at attila@attilathestockbroker.com, and it is available from Cherry Red Books plus many other shops.

Laura Taylor has interviewed Attila the Stockbroker for the Morning Star newspaper. You can read the interview here

Background: Still angry after all these years

Yorkshire's Firm of Poets aim for 'People's Republic of Poetry' ►

Glad you enjoyed it as much as me Greg - fantastic isn't it?! Proper looking forward to the gig with him in November :)

I've just read Attila's book myself, and fully concur with Laura's verdict. There is much humour in this autobiography, and in the course of documenting his life and times, he has produced an invaluable historical guide to the performance poetry and music scene over the last 35 years, as seen through his eyes. Fascinating stuff.

You would get more takers if this list were put on the gig guide, Mr Stockbroker. Well done to you all the same.

Here are all the forthcoming tour dates. I'll be doing readings from the book interspersed with poems and songs.
Books will be on sale of course :)

***EXTRA GIG**** Local ‘rock n roll’ book launch! Sat 26 Sept SHOREHAM The Piranhas, Contingent <https://www.facebook.com/pages/Contingent/334188403367061> and my band Barnstormer at the Duke of Wellington, plus a short reading from the section in my autobiography dealing with my time in Brussels in 1979, the incredible story of the attempts by the mayor to BAN all live rock music and the riots which followed. 'The riot starts at six o'clock!' www.dukeofwellingtonbrewhouse.co.uk]