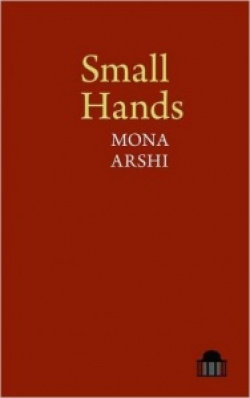 There is an obvious motif of hands running through Mona Arshi’s wonderful debut collection, Small Hands - hands and palms that have “dents” and “pleats”. Rain crops up many times in the poems, too, often at the poem’s close and (I’m guessing here) often as a metaphor for some huge, mysterious and approaching sadness. There is another motif of birds running through, too. Mona and I read together in April 2015 and we joked then about how many birds inadvertently turned up in both our poetry. Jars appear in three consecutive poems and there is a diptych of evocative poems about her mother. ‘Jesus Saves’ and ‘On Ellington Road’ are both snapshots of childhood.

Other subjects of these poems are the streets of Hounslow, relatives, family, life and inner life, the osmosis of language through skin, little creatures, spices, marriage, children. And then, underlying it all, there is the death of her brother, whose absence is a presence everywhere, but is addressed particularly in ‘Phone Call on a Train Journey’ and ‘In the Coroner’s Office’. Although Arshi wisely refrains from providing us with any details, his absence nonetheless is beautifully evoked via small details: spectacles, an earlobe, a grain of rice. Indeed, this is one way in which the collection manifests its power: that small objects and details hold enormous significance and leave tremendous reverberations.

Arshi’s joyous playfulness with form abounds - there are several list poems (‘Taster’, ‘What Every Girl Should Know Before Marriage’, ‘Bad Day in the Office’ and ‘You Are Not’) and prose poems. At the aforementioned reading, we and the other readers on the night had an interesting discussion about whether or not the description “prose poem” was actually a contradiction in terms. David Harsent is quoted somewhere as saying he thinks so, whereas Fiona Sampson disagrees. Or is it the other way round? Anyway, Mona and I agreed that we believed there was such a thing and Mona’s ‘Mr Beeharry’s Marriage Bureau’ is a superlative (and funny) example.

And let’s not forget the humour. Some of the lines in the collection are laugh-out-loud funny: “Your husband may not know you cheated with shop- / bought garam masala but God will know.” and “Meeting Renu, the new bride for my mum’s cousin, and being / scared for her as I’d heard about what had happened in the / laundrette the year before.” While still funny, this is careful poetry, reserved, biding its time until you fully appreciate it. Each word is polished and put into place, making the whole a glittering vibrant picture.

‘The Bird’ exemplifies all that I love and that is good about Arshi’s work. It is a poem about transformation, renewal, rebirth. It is also a superb study in “qualia” -those instances when our minds are engaged through our senses with the world around us. The bird-mother smells of “preening oil, salt, top notes of the earth”, and when she hops from hand to window sill, she leaves “complex glitter” in the narrator’s hand. Why is that “complex glitter” so good? It’s the surprising and unlikely juxtaposition of those two words, which don’t otherwise have a natural affiliation. It’s the mystery as to why glitter could be “complex”. Whatever the reason, it’s that “complex glitter” that one is left with after having read all these occasionally bizarre, precise, sensual poems. Highly recommended.

◄ Reach for the sky at Write Out Loud Marsden tonight

Armitage ready to investigate the role of rap in modern poetry ►