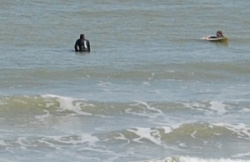 ~~Watching wet suited fella’s a’bobbing
Got to wondering and then some thinking
Why so much sitting, and waiting
Continuous bobbing with legs a’dangling
There goes a wave, what’s wrong with it?
Is he just enjoying a tight suited, comfortable, sit?

Occasionally...  Very occasionally, whilst waiting
Activity will occur, legs and arms wildly thrashing
Damn, missed the crest.  One of the best.  Never mind.
Back to gently bobbing, legs apart, and feet aligned
But, about that previous excitement!  A watcher might brood
Perhaps there’s something’ else. Perhaps something lewd?

Could there be?  Bobbing alone.  So brave
Some reason other than catching a wave
Perhaps something much, much more complex
An act often referred to as, ‘sex’
An orgasmic experience only enjoyed
By those rubberised and temporarily eunuchoid

Up down, up down, legs wide splayed
Eyes fixed on the sea.   Does he seek a mermaid?
Bondaged to board with tight ankle strap
Hoping with her scaleyed tail she’ll entrap
His slithering form with buttocks so tight
Providing the craving he longs to incite

Untying his tethering  anklet cord
The shouted warnings of others ignored
He slipped from his board and did dive
Would it be the last time he’s seen alive?
No.  He bobs up.  His face says it all
Will have to be satisfied by a page three full frontal

So, when you see those bobbing figures from the  seashore
They are hoping to enter a mermaid’s boudoir
There now, the reason is no longer secret
You  gaze on someone forced celibate
Tough luck you might very well say
But, rest assured he’ll be back the next day.

A GOOD OR BAD PAST ►

Thank you Colin glad it reached you

Hello Jack, I very much enjoyed bobbing through your poem. At first I was sitting on the beach or cliff top but then thought it would be fun to imagine myself as a seal bobbing up and down watching the surfers do the same. Thanks for posting and making me smile.