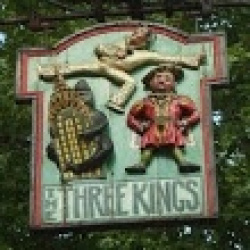 “Number three: Poseidon is Morrissey,” said Kevin Rienhardt, before launching into his poem about travelling into Cornwall on a ferry and facing the fury of a stormy sea, offering up sacrifices of lamb kebabs to modern-day musical idols as Odysseus once had offered up true sacrifices to appease the forces that governed the ancient Grecian world. An explanation is in order: this is Y Tuesday, an open mic poetry event held on the first Tuesday of every month in the Three Kings pub in Clerkenwell, London.

For me, the evening began at a bus stop, in the company of poets Fran Lock and Steev Burgess (respectively the furious voice of the Irish and Gypsy-Poet Diaspora, and a “prose poem pessimist” with a rather good line in woolly vests and internal rhyme schemes). Leaning by some bins were two old-fashioned travel cases someone had disowned. Fran Lock and I took it up on ourselves to investigate their contents on the off chance their might be money/body parts/a live snake therein. It was that sort of evening. After that the bus came and took us into Clerkenwell proper, an area steeped in mysticism and medieval political intrigue in the same way that Whitechapel is somehow laced with an element of gothic horror.

In the reserved room in the upper storey of the Three Kings, incense and candles burned, cakes were brought out courtesy of Ceri May (who, along with Steev, is responsible for running the evening), and poets in various stages of artistic fulfilment drifted in, coming by their ones and twos. The overall effect created was a mixture of cosiness and excitement - an atmosphere somewhere between a séance and a sewing circle, with a dash of highbrow book or chess club thrown in for good measure.

In the comfortable gloaming of the room, the brightest stars of the evening had a chance to shine with greater intensity and, in some cases, outright artistic ferocity. It would be futile to list all the poets attending the evening by name, but amongst those who lent greatest flavour to the event were Robert Yates, who specialises in blackly comic translations of Nietzschian German poetry; the afore-mentioned Fran Lock, author of Flatrock, who is still angry about the Enclosures Act that saw the common land ripped from the nation’s peasants (now several hundred years ago), and whose brilliant poem Ghost contains the line “It is in the pale, pubescent glow of early evening that the human resources begin their vindictive ministry”, demonstrating both a talent for the acerbic and a deep understanding of the flaws in human modernity;  the (also afore-mentioned) Steev Burgess - or Burgess the Rhymer as he’s commonly identified - whose unique, fast-paced patter is a joy to hear and who’s capable of combining this with serious content (a fine example of which is The Sleeping Lands, where he uses the Vladirmirka road, the infamous road to Siberia, as a metaphor for the human experience and the voyage between birth and death: “Everybody heading to the harsh lands/ Everybody wrapped against the cold/ Taking little photos of their journey/ Looking for another hand to hold”; and the man known  as “Jazzman John”, who proves that even on the bleeding edge of the poetic scene, age sometimes just means having a lifetime of experience and craftsmanship to draw on. The icing on the cake came from host Ceri May and her poem, light and clever in tone, about the sheer biological wonder that is sea life. Specifically squid.

Music (albeit in acapella form) also got a look in, thanks to the hilarious and talented Fran Isherwood and her song “about a surgeon who likes to take his work home with him” (sample lyric: “so I have to tell you laddie/ Though I know your scalpel is swell,/ That it ALL belongs to Daddy/ Because my Daddy dissects me so well!”). Even the pub is to be praised, not just for hosting the monthly event, but also for laying on good meals at a surprisingly reasonable price for the attendant wordsmiths and for their consistently friendly service.

A review, by rights, should contain some criticism, but it’s honestly hard to find a bad word to say about Y Tuesday. I’ve attended the event before, and so I am forced to admit that not every performance on every Y Tuesday is a true spectacular. Even the best writers and performers occasionally hit a bum note. That said, this evening typifies the event: even the poets who I have not been able to mention by name in this review display both friendliness, competence at their craft and, for the most part, a consummate professionalism that is clearly born of a genuine, and thoroughly deserved pride in their work. For an open-mic evening, the level of potentially publishable material and talent on display here is impressive ... I say impressive, but I honestly just had to force myself to delete the phrase “breathtaking” because I’d gushed too much already, and if that’s not a seal of approval, I don’t know what is. Once again, Y Tuesday is the first Tuesday of every month, 8pm, at the Three Kings pub in Clerkenwell, London, and if you’ve got something to read, it’s never hostile to new talent. Consider this a whole-hearted recommendation.