'The pleasures of performing include the frisson that it might all go wrong - and the nice cup of tea afterwards': Kate Fox 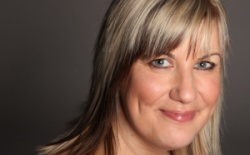 Stand-up poet and writer Kate Fox has been a regular on BBC Radio 4’s Saturday Live, and has two new shows due to be aired on Radio 4 this month. In an email interview with Greg Freeman, she talks about doing a university PhD in performance; her years in radio journalism; raising awareness of the value of poetry and spoken word by campaigning on pay issues and establishing a poets’ network; and how she sees herself as very much a Northern poet.

Without giving too much of the game away, can you tell us a little bit more about your upcoming radio shows?

One’s about me not wanting children, one’s about me not wanting a big white wedding and in both of them I get the audience to vote on whether they’d rather take the money they cost or the child or wedding! Both are stand-up with a poem at the end. I originally took an early version of the show about me not wanting children to the Edinburgh Fringe and although I then decided that it was daft not to include poems in my shows (much more my comfort zone), Radio 4’s comedy commissioner only really saw the potential for a show in something I did which was more in a stand-up style. I suppose it shows it’s worth experimenting sometimes if you want people to see you in a different light.

Your website says you have a studentship to do a PhD in performance at the University of Leeds. Does that mean you are learning more about it, or telling others how to do it?

A bit of both, I suppose. At the moment I’m purely researching. Looking at how both stand-up poetry and stand-up comedy can be used to express particular identities - and I’m particularly interested in Northernness and femaleness. Next year I’ll be doing a bit of teaching because that’s part of my studentship - but they haven’t told me on what modules yet. There certainly isn’t a stand-up or poetry module so it’ll be interesting to see what I’m doing!

Would you say you are very much a Northern poet – and if so, what does that mean?

I would say I’m very much a Northern poet and I’d say that it means different things to different people (Lots of people would say there isn’t just one north for a start - but I was born in Yorkshire, went to school in Cumbria and worked and started writing in the North-East so I’m a generic Northerner!). I think it can give people one place to express resistance to a more Londoncentric view of the country - but people express that resistance in many different ways. My way is very different to that of John Cooper Clarke or Helen Mort or Ian McMillan or Ted Hughes for example - and theirs to each others.

You’ve been poet in residence at Glastonbury festival. Can you tell us more about that experience?

I was asked to write two poems a day for their website and so I dutifully saw and observed as much as I could, wrote a lot, fretted over charging my mobile devices and sent it off - as well as co-writing a crime novella set in real time during the festival with my husband Alfie Crow (which Valley Press published as the festival ended). Meanwhile not being as traumatised by staying in a tent for five nights as I was when I was a Girl Guide. I wish I’d discovered the friendly community behind the poet’s tent earlier than on my last day, the Sunday, and done some gentle hanging out there. I probably made that gig a lot harder than it needed to be!

A few months ago you were involved in a row about payments for poets relating to a poem about a Bradford beck. That quickly grew into a mobilisation of other poets and a rallying cry to seek fairer pay for poetic output.  How is that campaign progressing? Have been you been surprised at the response?

Me and Tamar Yoseloff, a poet who also took up the rallying call, had a really good meeting with an organisation who are very keen to help the network do a lot of the things that poets said they wanted when we asked them - campaigning on pay issues, especially to festivals who don’t pay, a web forum, ways of networking, disseminating a code of practice, raising awareness of the value of poetry and spoken word. I can’t say any more because we’ve to finalise that and put it to the vote of the people who joined the network’s email list (You still can at poetsnetwork@gmail.com). I was surprised at how quickly people responded to something that’s been talked about as an issue for years - but really people just needed a rallying point. I definitely think there’s something powerful in people joining together. We can give each other confidence (already seem to have given each other confidence) that the things we’re asking for are reasonable.

You originally trained as a radio journalist. Why did you give up journalism for poetry? Or do you find that the two are still linked in some way?

I’ve always found the two are linked. Writing radio news bulletins involves picking and weighing every word carefully. Poetry is that plus the unconscious. Maybe. I still feel like a journalist when I’m writing topical or conference poems and learning how to be an ethnographer for my PhD research (which involves a sort of anthropological writing) is another way of combing a reporterly and a poetic voice. (and a comic voice too - though I’ve yet to see how that pans out in my PhD. I think it’s possible. I’d love to try, even though it often means I’m not taken seriously. I have the comedian’s insecurity about that!).

You have been and are involved in a number of community projects. Which ones have given you the most enjoyment and/or satisfaction?

Almost too many to name. I’ve been working in more collaborative ways with groups in the past couple of years though and that’s been such a fulfilling process. There was a group of young homeless people in Newcastle who took part in a project via Youth Homeless North East and Helix Arts and we wrote together about their experiences of homelessness for a report that was presented at Downing Street. As a formerly homeless young person, that one meant a lot. Then a group of six Gateshead residents and we worked along with the amazing artist Tommy Anderson to put together a really varied, vibrant exhibition of their lives. Plus there’s the satisfaction of my ongoing residency for the charity First Story in Feversham College in Bradford which is an all-girls Muslim school. Their second anthology launches this week and it’s full of amazing, honest, brave, funny writing.

Who are your favourite poets and performers, the ones that have inspired you?

Crumbs, this could be a long list. My kin are stand-up poets really, particularly the ones I saw early or who showed me new ways to do things; John Hegley, all of Aisle 16, Jenny Lindsay/Anita Govan/Jem Rolls because of their Edinburgh Fringe show, my fellow Saturday Live poets Murray Lachlan Young, Elvis McGonagall, Francesca Beard, Matt Harvey, and Lemn Sissay, north-east stand-ups like Scott Tyrrell and Rowan McCabe and more recently I loved Hollie McNish’s laid-back, intimate performance style.

Then to read, I love poets who are either very direct or very indirect. The surreal trio of Selima Hill, Pascale Petit and Angela Readman have blown my mind open in different ways. I discovered Leonard Cohen’s poetry thanks to a helpful English teacher and he remains important, probably more as an explorer than a poet. (Is that naff?) Plus as inspirations in how to be lots of different things in Poetry World whilst having tons of integrity as writers and staying true to themselves I look up to (can I say the northern trio?) of Jo Bell, Helen Mort and Ian McMillan.

Can you sum up what it is about performing poetry live that you enjoy so much?

The pleasure of playing with words and thoughts, the frisson of how it might all go wrong, the connections and disconnections with audiences who are there to listen - and the nice cup of tea afterwards to help the massive adrenaline rush subside.