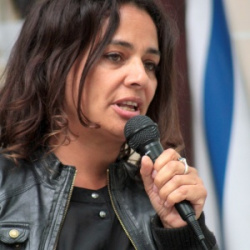 The diversity of this year’s Forward prize shortlist for best first collection has been hailed as “a transformative moment in poetry publishing”. The shortlist for the £5,000 Felix Dennis prize includes Mona Arshi, a Punjabi Sikh from west London, for Small Hands; Chinese-British writer Sarah Howe for Loop of Jade; Jamaican-British poet Karen McCarthy Woolf, pictured, for An Aviary of Small Birds; plus British poet Andrew McMillan for Physical; and American Matthew Siegel for Blood Work.

The executive director of the Forward Arts Foundation, Susannah Herbert, was reported by the Guardian as hailing the inclusion of three books by first and second-generation immigrants to Britain as a “transformative moment in poetry publishing. Ten years ago, just one per cent of contemporary poetry published by the major presses in Britain was by black or minority ethnic poets – a depressing statistic, suggesting a failure to notice the existence of 14 per cent of the nation.  Since then, poetry publishing has woken up, rubbed its eyes, taken action.”

She added: “The five judges for this year’s Forwards were not working to quotas. They were invited to make a selection of the best poetry collections published, and to bring them to the attention of the widest possible audience: the diversity of the best first collection list therefore testifies to a long-overdue cracking open of the poetry pantheon.”

Irish poet Paul Muldoon’s latest collection, One Thousand Things Worth Knowing, has been included in the shortlist for this year’s £10,000 Forward prize for best collection. It joins Claudia Rankine’s Citizen, a 160-page exploration of everyday racism through lyric essays, and scraps of film script and photography; Peter Riley’s Due North, a poem in 12 chapters looking at the human movement northwards; former winner Ciaran Carson’s From Elsewhere, in which the Irish poet sets translations from the French poet Jean Follain against “original” poems inspired by those translations; and Irish poet Eiléan Ní Chuilleanáin’s  The Boys of Bluehill, a look at memory and time.

One of the Forward prize judges, Carrie Etter, said of Claudia Rankine’s Citizen:  “People who insist that poetry is only poetry if it’s in lines are missing out. As Citizen is in prose, I anticipate some readers’ definition of poetry will exclude it, and so some may object to its inclusion on the list. So be it.” Her fellow judges are author AL Kennedy (chair), poets Colette Bryce and Warsan Shire, and BBC producer Emma Harding.

The Forward prize ceremony is on Monday 28 September at 7pm at the Southbank Centre's Royal Festival Hall.

Darren Thomas is compere at Write Out Loud Wigan tonight ►