Competition closes in 16 days, 7 hours. Get details and Enter. 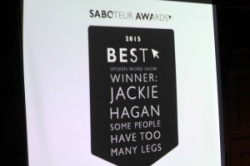 There were some dramatic and heartwarming stories as the 2015 Saboteur awards were handed out on Sunday night. Jackie Hagan, whose Some People Have Too Many Legs won best spoken word show, sent a message to the organisers, Sabotage Reviews, saying that she was unable to get to London because she had been rushed back into hospital with “a dodgy thumb … my next show may be titled, Some People Have Too Many Thumbs”. She added that she hoped everyone at the awards ceremony was “suitably drunk … I’m off my tits with morphine”.

Hagan told Write Out Loud in an interview earlier this year that “health-wise - they never figured out what was wrong with me, there's been various diagnoses thrown around but I'm not that bothered. I just eat more veg, and figure if it happens again I'll cope.” After a triumphant performance at Manchester’s Contact theatre last month at the end of a national tour, Write Out Loud’s Judy Gordon wrote: “She doesn’t ask for pity - she just tells it like it is … at the end she described coming to terms with her stump and learning to love it despite its bizarre appearance - and then revealed it in all its comic glory before drinking bubbly out of her prosthesis.” (Write Out Loud understands that Jackie is back home from hospital now. Get well soon, Jackie!)

There was an equally rousing reception at the Saboteur awards on Sunday night when the winner of the best one-off event was announced. Jo Bell’s 52 Project was a series of regular poetry prompts throughout 2014, involving a group of 560 poets. Bell said as she collected the award that the project’s “creative friction” had “changed lives”, enabling many to gain the confidence to go out there and be published, as well as sometimes face up to things such as abuse in their past that they had never been able to confront before.

One poet involved paid tribute to the 52 effect and its supportive community of poets in a moving testimony on Facebook. Rachel McGladdery said: “52 was the one solid something that I held onto last year. It meant that my first response to everything was a poetic one. I can't describe how necessary that was in one of the toughest years I have ever had …  it meant I could still smile sincerely while internally crying, meant I was in two places at once, in the present experiencing difficult and sad sad times, and also at a remove, observing, storing and writing whether in my head or physically on paper. I had a place to go peopled with real live humans who didn't need me to explain anything.”

The hugely popular Hollie McNish won Saboteur’s best spoken word performer award, to add to her Arts Foundation award at the beginning of the year. Those who voted for her paid tribute to McNish speaking up “for those whose voices are never heard”, as well as her willingness to confront and refusal to be cowed by internet trolls. Write Out Loud’s Laura Taylor recently summed up one of her performances: “Hollie, you knocked me for six girl, long may you continue to grace stage, ear and eye space across the land. You are a total inspiration, as a woman and as a poet.”

Manchester’s Bad Language won the best regular spoken word night award, pipping Bang Said The Gun, Penned in the Margins won best innovative publisher for the second time – beating The Emma Press by a single vote, and Lighthouse Literary Journal won best magazine, among some of the other awards.

Victoria Kennefick, who had flown in from Cork and picked up the best pamphlet award for her collection White Whale, paid tribute to the openness of the Saboteur awards, in which anyone can vote. The fun, almost riotous night was skillfully compered by Sabotage’s James Webster, who did a good job in whipping up the levels of audience excitement before each award announcement, as well as giving them the chance to be winners too with Saboteur bingo. Introducing the event was poet and academic Claire Trevien, the instigator of Sabotage Reviews, which complements its annual awards with online reviews of books and live events throughout the year.

The popularity, prestige and importance of the Saboteur awards – the point of them is that they are not the Forwards, the TS Eliot, or the Costa – continues to gather momentum. Well done, Sabotage, for organising them, and for helping to recognise those who as a result are no longer under the radar, but becoming louder, and prouder.

The awards night, at Vout-O-Reenee's, near the Tower of London, was sponsored by Josephine Baker Champagne, produced by Montaudon Wine, with each winner receiving a bottle. Here is the full list of winners

Hoping Jackie's health only improves, too.

Jackie is one of my favourite persons in the world. What a woman!.

Nice piece, Greg. An excellent way to raise the profile of poetry, of writing generally.

And encouraging those coming in on the ground floor. (Odd, that both occasions I've been to the venues were in cellars.)