Meeting up with Muldoon: Manchester's Poets and Players competition winners 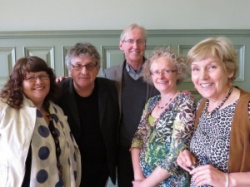 What a great return to the newly-extended Whitworth art gallery for Mancheser's Poets and Players, where a full house heard the results of the 2015 poetry competition. Not only did we hear the winners from nearly 900 entries submitted by 300 poets from around the world, but we also got to meet the judge – the masterly Paul Muldoon.

The musical element was provided by the intriguingly-named Minute Taker, Manchester-based “folktronic” singer-songwriter Ben McGarvey, whose stage name reveals his previous job. He uses a mix of electronic and voice “loops” to create a delicate web of sound over which he sings and plays keyboards. The on-the-spot creation of background waves of voices and whispers before he started singing added a special magic, and the chorale atmosphere coupled with his tender voice and mournful songs incorporating light and shade were much appreciated. His time spent daydreaming at work clearly paid off.

It was a coup by P&P to get Paul Muldoon to judge this competition, and he gave us an insight into how seriously he took the task. He read every poem submitted, all passed to him without names attached, and over a period of weeks sifted and winnowed his way through to the nuggets of gold. His warm comments about the final selection clearly came from the heart, as he introduced each poet to read their own work.The first honourable mention went to Oxford poet and novelist Maeve Henry with the prescient Someone Else, which starts: “The quilt still smells of you, but your bedroom walls / are pocked with blu-tack, football teams all gone./ They say you crossed the border, walked into Syria.” It ends:

Why are you breaking my heart?

It’s done. It’s broken. I was looking the wrong way,

like the guards at the airport. They caught you on camera,

clear as the scan of my womb. Now someone else

is being born, a boy with a gun, screaming obscenities.

And the view from your room is just the same:

that lilac bush, a blackbird, the washing line.

As Muldoon said, poetry may help us to make sense of  our lives. The second honourable mention went to Mary Oliver, a  teacher, poet and writer from Newlyn, Cornwall. Her boisterous and atmospheric poem ‘Alas for Mrs Hickman’ tells the true story of  a bare-knuckle fight on Hungerford common in 1821, recorded by William Hazlitt. It was graphic, gory and literally pulled no punches, ending:

blood drains from his ugly mug,
out his eyes, out his nose, out his ears.
But he heaves himself up,
and smiles his ghastly smile.

Eighteen rounds later, his brow screwed up
against the setting sun,
he falls for the last time. I stoops
& limply shakes his broken fist – the sign

for my homing pigeon to take to the skies &
fly to the bosom of my beloved wife – the message
Alas for Mrs Hickman!
attached to its little pink leg.

Frances Nagle from Hazel Grove, Stockport, chose the wrong time to go away to Italy – she got an honourable mention for her poem ‘Pilgrims’ but missed the chance to hear Muldoon read it out with its story of the first-footing tradition, which ends: “Never far away is the one we don’t talk about / who’ll arrive in his own time and let himself in.”

Third prize went to Janine Pinion’s ‘Ulster Grill’, a grimly witty take on that favourite breakfast, coupled with tender memories of the countryside and a bitter kicker about history - ”blood and guts, sunny side up” - and the refrain: “Is it enough? Would you like some more?” Pinion, a Belfast-born poet living in Wirral, heard Muldoon describe her work as “really spectacular”.

Then it was Maeve Henry’s turn again, as she read the second-prize winner,  the “brilliant” ‘Birch Bark Letter Number 292’ about the archaeological excavation of the so-called “deep cultural layer” undertaken in Russia after the second world war. "Over time we have recovered comb cases,  / leather knife shields and a thousand birch bark letters, /  brittle and black as rain soaked leaves.“

And the winning poem? Well, they say less is more,  and David Wilson’s ‘Everest’ was spare but said so much.

Once it was Chomolungma,
Mother Goddess of the Earth,
a face whose veil rarely lifted,
its whiteness the White Whale’s.

Now it’s like Elvis near the end,
a giant in a soiled jumpsuit,
blank, useful for percentages,
a sheet with all the music fled.

Wilson, who lives in North Yorkshire, started writing poetry a few years ago after reading ‘Midsummer, Tobago’ by Derek Walcott on the wall of a hospital waiting room in Leeds (three cheers for public poetry). Mountains and climbing are favourite topics of his. 'Everest' was such a terrific poem that Muldoon got him to read it twice. Muldoon topped off the afternoon by reading some of his own poetry and reminded us of his love of music with the wry ‘Comeback’, which could apply to many band revivals.

For a kilo of Khartoum

And come back to trash

And make a comeback baby

A comeback don’t you see?

Come back baby to me.

He also included his homage to a Pisarro picture of apple pickers, memories of the coroner’s report into Buddy Holly’s death, and his terrific Cuba poems. Muldoon is such a fine reader of poetry, his own and other people’s, because he give the listener time to absorb, understand, appreciate. He is a thoughtful writer, a generous reader and a gracious listener -  the perfect judge for a terrific competition finale. Bravo, Poets and Players.

◄ New 'page and stage' anthology to be launched in Guildford

Stitching together text and textiles at Write Out Loud Stockport tonight ►