'Poetry should have bite and snarl, but it's better for joy and sadness than anger': Luke Wright 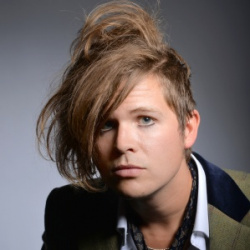 Energetic performance poet and broadcaster Luke Wright has a new show out – and he’s still touring with his old one, too. He was performing his new production, What I Learned from Johnny Bevan, at the Roundhouse in London this week. In an interview with Greg Freeman he talks about the new show’s political backdrop; his fondness for John Betjeman and “simple poems that get you in the gut”; why so many people love John Cooper Clarke; and how poetry “can and should have bite and snarl, but it’s better for joy and sadness than it is anger”.

Your new show, What I learned from Johnny Bevan, is a challenging departure for you – an hour-long narrative poem, without any introduction. Without wanting to give too much away about it  – you take the show to Edinburgh this summer - it does paint a fairly gloomy picture about developments in politics and society since the 1990s. Will you be adding anything, after the election result? And does it contain autobiographical elements as well?

I won’t be adding to it, no. In fact I think the gloomy picture has been rather proven by the election result. I think we’re really starting to see just how damaging Blairism was to the labour movement. The Labour party doesn’t know what it should be right now, and it’s haemorrhaging voters from its traditional base. I actually think Ed Miliband was heading in the right direction, he just didn’t communicate it, or his own leadership qualities very well. But because he failed I fear the party will lurch back to the right. You only have to listen to the waffle Andy Burnham spoke in his campaign launch video to know they haven’t got the answers yet.

JB is a little autobiographical. Nick’s background is very like my own and I had a friend from a world not too different to Johnny’s. But the characters are not me and my friend, they have their own internal worlds.

I saw What I Learned from Johnny Bevan at what I think was its first outing, at Wenlock poetry festival in late April.  Where else are you taking it before Edinburgh? Is it likely to get changed much along the way? Do you aim to come up with a new show each year? How difficult is it to maintain that regime?

Having a new show every year isn’t particularly difficult. I’m a writer, that’s what I do. This year I have two! Johnny Bevan and Stay-at-Home Dandy. That said, I do prefer to run shows like Stay-at-Home Dandy (it’s a show of 10 poems, thematically linked) in over a fairly long period of time. It was half finished last summer, and it’s really benefited from the culling of some poems and adding new ones that have given the overall narrative a better arc. JB I wrote very quickly (over about two months), which better suits it as one long piece. But I don’t think my work ethic is anywhere near what it might be. I subscribe to Johnny Clarke’s theory that poets must subject themselves to periods of idleness.

When reviewing a previous show of yours, Essex Lion, I thought that you were “on the side of those who feel that somehow, somewhere, something has been lost”.  Included in that show was a poem about ‘Nigel Farridge’. Does the phenomenon of Ukip provide a slightly disturbing fascination for you?

As I have grown older I begun to see politics from a more empathetic standpoint, and less of an ideological one. I empathise with people who are dissatisfied with political life in Britain. Ukip is interesting because it has gained the support of so many people. It’s shaken British politics up and any kind of change will always interest me. That said, Nigel Farage’s vision is a particularly chilling one. While big business and technocratic society doesn’t appeal to me, nor do I want to go back to some rose-tinted version of the past where provisions for the most vulnerable in society are sacrificed on the altar of “common sense.”

Which poets do you particularly admire?  For instance, you’ve cited John Betjeman as a big influence, and there certainly is a vein of Betjemanesque nostalgia running through your poetry, as well as a commitment to traditional poetic metres and regular rhyme schemes.

How and where did you start as a performance poet? And when and how did you get involved with programmes such as BBC Radio 4’s Saturday Live?

I began when I was 17, going on between bands with Ross Sutherland and railing against everything. By the time I started doing Sat Live in 2008, I had mellowed out a bit. I think poetry can and should have bite and snarl, but it’s better for joy and sadness than it is anger.

You’ve described John Cooper Clarke as an inspiration, and you have often appeared in shows with him. What is he like to work alongside?

Johnny’s a big-hearted guy who is incredibly in tune with average people. He’s a natural underdog, non-ideological. He feels people, which is why people are so in love with him. He’s always been good to me, we’re good pals now, we can make each other laugh.

With Ross Sutherland, you co-founded performance collective Aisle 16, whose night of literary cabaret, Homework, runs every six months of the year at Bethnal Green Working Men’s Club in east London. What would a typical night there consist of?

There is no typical night. It’s always different, always new. The residents respond to the theme in a variety of different ways. Last year I even ended up writing a garage track. It takes you out of your comfort zone and contributes brilliantly to your development as an artist.

You obviously enjoy your role as curator and compere of the poetry tent at the Latitude festival. Who are the new and upcoming names to look out for there this year? What changes, if any, have you seen in recent years on the spoken word scene?

The spoken word scene keeps growing. It’s not really *changing* per se at the moment, but it’s more and more established every year. I really rate Jemima Foxtrot, keep an eye out for her. She’s supported me on tour this year and she’s ace.

What drives you on to write poetry? And why do you think you need a stage, and an audience, rather than just publishing it on the page?

I like the travel. Seriously, I belong on trains now. It’s all I know. There’s no better feeling that finishing a poem and reading it through to yourself, but I get itchy feet and I like to get out into the world. I like to eat well.

Luke Wright will be performing What I Learned from Johnny Bevan at the Roundhouse in London on Friday 29 May, at the Latitude festival in Suffolk on Saturday 18 July, and at Summerhall in Edinburgh from 7-30 August

◄ Warmth and wonder from Mandy Coe and Brian Patten

Luke is ACE. Check him out.

There'll always be an England etc

I found the attitudes towards poetry from this poet a
pleasing reminder of what inspires writers even today.
Politically, I'm unsure why he should find Nigel Farage/
Ukip "chilling". How far we seem to have moved - from a
proud self-regulating nation unafraid to take on the world
- to an easily frightened entity content to lurk among 27
other countries, many of which are former dictatorships
and failed communists states busy looking out for themselves with little obvious concern for this small
island nation and its wishes to revert back to sovereign
status and a TRADING nation - except when we threaten to leave and take our billions per annum contribution with us.
Perhaps Mr Wright could write (no pun intended) a poem
about the motives that saw virtually 4 million people
heed the message from Ukip about wanting the country
back.

An enjoyable and interesting piece! Thanks. :-)