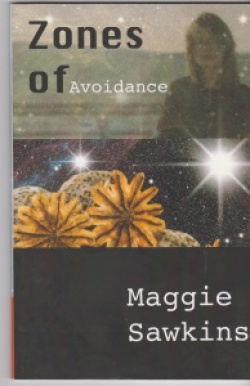 This year’s winner of the Ted Hughes award for new work in poetry was the former poet laureate, Andrew Motion, for his work based on interviews with soldiers returning from Afghanistan. The previous year’s winner, Maggie Sawkins, wrote about another kind of war in Zones of Avoidance -  a daughter’s drug addiction, seen through a mother’s eyes -  which has now been published, with other poems, as a collection.

‘Zones of Avoidance’ is a long narrative poem, that with other poems on the same subject, makes up more than half of the book. The often harrowing poetry is built on a tough, unwavering rhythm and music in its lines that is unobtrusive, like a compere unwilling to spend too much time in the spotlight – and Sawkins is a poetry compere, of course.

Thus the title poem begins: “I’m reading The Confessions of an English Opium Eater - / I want to understand what drove my daughter out in the snow.” Her daughter veers between hostel and sleeping rough. The poet goes to the “pigeon house”, where her grandson was probably conceived, and is even invited to tea, “thought I had to take / my own sandwiches, garibaldi biscuits and flask.” One day she has run out to retrieve her daughter from the sea: “Always at the last minute I rush in to save her.” There is a Romanian boyfriend, of no fixed abode: “My daughter thinks he can fix her life.” A large part of the poem deals with the process of the baby being adopted:

The tick and the tock. All the echoing corridors

In between. So this is where they were leading –

to this spot that frames us in strip-light

waiting for a nurse to unlock the door,

where we listen, stricken, to the words I love you

escaping from the hard box of my throat.

There is the moment of saying goodbye to the child:

My daughter sang along to Prince’s Purple Rain, as if her voice

could drown out fate. We hugged the baby goodbye.

I dropped her off at Baytrees to begin her detox.

If she ever meets him again he’ll be a little man.

There is occasional humour, as Sawkins describes visiting her daughter in the hostel: “Waldo, the Peruvian support worker, says his favourite poet’s Pablo Neruda. // We’re pondering over an Ode to an Conger Eel /  when a resident keels over in the corridor.”  ‘Zones of Avoidance’ ends with a kind of resolution and peace:

We’re in the garden, Sunny Girl and me, sipping Cola,

talking about everything and nothing,

No longer boxing at shadows, no longer knocking back

The wind’s chasing leaves from the handerkerchief tree –

the branches are losing their grip.

In a series of associated poems – ‘My Daughter’s Habit’, ‘Act’, ‘Hooked’, and ‘The Cord’ – Sawkins examines the conflicts and contradictions of the mother-daughter relationship honestly, almost forensically, taking you through the pain and to the other side: “I wasn’t cut out to be a Joan of Arc.” (‘Act’) and “I should lock you out but you’re too far in” (‘Hooked’).

Other poems in the collection are about women who can’t sleep, or who prefer the “magic” of dogs to men. Images of snow and huskies occur more than once. There are striking poems about parents, on a fairground rollercoaster (‘The Wild Mouse’), or almost unrecognisable through illness: “That’s not my mother. / My mother had a face like a moon in a bottle. / She picked bluebells and blackberries, / taught me to hula, pierced my ears.”

There are poems about meeting the pop group Darts, going for a spin in a 1970s MGB, and a trip to Berlin after the wall came down: “I caught a glimpse of a young woman in the mirror opposite, her eyes another country. She was staring straight through me to a place without corners – a place where no-one knew your scent, your name.” There is a disturbing undercurrent running through this collection, despite moments of lightness, summed up perhaps in the last poem ‘The Emptiness’:

You’ll carry it with your eyes set beyond the horizon,

beyond the glass gaze of the sun

until you find the right spot to cast your sodden clothes

and the rain will drain through you

and the rain will drain through you.”

‘Zones of Avoidance’ grew out of the poet’s personal and professional involvement with people in recovery from addictions; Maggie Sawkins is a qualified “peer recovery broker” on a therapeutic course run by Portsmouth city council, and teaches creative writing in community and healthcare settings. She is also the founder of Portsmouth’s long-running Tongues & Grooves poetry and music club, and is one of poetry’s quiet and relatively unsung heroes. These despatches from the frontline form a brave body of work that is original; they are from a place that you would not like to visit; they have been gouged, and then crafted, from the heart.