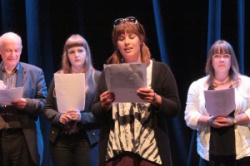 You wouldn’t necessarily consider Guildford to be a hotbed of avant-garde poetry. And that could be why, when 11 people took to the stage to perform Bob Cobbing’s ABC in Sound at the finale of the Surrey poetry festival on Saturday, they outnumbered the remaining audience at the University of Surrey’s Ivy arts centre by some distance.

The day-long event, organised by the university’s poet in residence, Nicholas Johnson, had begun  with news of the late withdrawals of Emily Critchley and Patrick McGuinness from the lineup.

The first poet to read was Guildford-born John Bevis, who provided moments to savour with his poem ‘Walthamstow’, about how “the English language bites back at the English’; a short and topical poem called ‘Attribution’; and a funny monologue about public libraries, ‘Licence to Borrow’, about how he has managed to collect cards for around two thirds of the 153 public library authorities in England, and a few beyond.

He was followed by David Ashford, who delivered an 18-minute, three-part sequence about three generations of Birmingham workers in his family, taking in radicalism, Keynesian economics (with particular reference to the headquarters of the Central Electrical Generating Board in Brum), and the Thatcher era, all set against a slightly bewildering Tolkienesque framework. He read it all with great passion and speed, occasionally tapping his foot to the rhythm of the lines.

I missed John Healy’s reading from his autobiography The Grass Arena, which is now a Penguin Modern Classic. Healy, a former vagrant alcoholic, learned to play chess in prison, and later won 10 major British chess tournaments.

Vagrancy is one of the interests of poet and historian John Seed, who spoke about “trampers” moving about the country looking for work, and migrants from the Irish famine arriving in England with only the clothes they stood up in, some of them unable to speak the language.  He also read from another manuscript, which “will probably never be published”, containing accounts from the London Blitz, sometimes verbatim, sometimes “rewritten but not invented”. It is a work full of revelations, such as the fact that bombing resulted in great demand for deckchairs and camp beds, and that you could tell how many people lived in a house from the number of packed suitcases in the hall. And this line: “The searchlights were beautiful - it was like watching the end of the world.”

John Hall had been intending to read from his collaboration with Emily Critchley. Because of her non-show and this enforced timetable change, he took us instead on a rather long rail journey in the West Country, reading a number of poems from an unpublished sequence reflecting his impressions, observations and insights gained from several train trips, including this: “The point of a train is that it goes somewhere, near where you’re going.”

The absence of Patrick McGuinness from the event gave three Surrey creative writing MA students the chance to step up. Arguably, there should have been a place for them on the bill in the first place.  Haley Jenkins, Lydia Fitzer, and Stephen Davids all seized their moments, before Nicholas Johnson, whose small press Etruscan Books is based in Hastings, told of the independent cinema that convinced him to move to the south coast, and read his poem ‘The Boats’, which includes a reference to the fishing that still carries on there.

English-born Simon Pettet had flown in from New York. He read in a strangely emphatic, elaborate style, pronouncing every consonant ending, lingering lovingly over sibilants, perhaps lingering a little too long over each line, and making much use of repetition. To be fair, he tried to engage with the audience, confiding at one point that “my poems tread a pretty fine line towards bathos. I’m taking some risks.” He often seemed to be expecting some sort of reaction, maybe some whoops and yells, such as he might receive from a NYC audience. By contrast, Catalan poet Jessica Pujol Duran – last year’s Surrey poet in residence – read her poems in a more rapid style, both in English and Catalan.

We moved on to the festival’s big occasion. It was preceded by Catalogue, a film by Holly Antrum featuring Bob Cobbing’s widow Jennifer Pike reciting his ABC in Sound, accompanied at times by saxophonist Lol Coxhill. The concrete, visual and sound poet’s ABC text was then performed on stage. This was masterminded by Stephen Mooney, another former Surrey poet in residence, the university’s current creative writing programme director, and co-founder of the small press Veer Books. The reading was delivered with full dramatic and often comic effect, which was not lost on the scattered remains of the audience.

Surrey’s creative writing course does seem to lean towards the experimental, at least as far as poetry is concerned. A recent visitor to the university was the notoriously difficult JH Prynne, for instance. So why was the attendance so thin? Tickets were very reasonably priced, £12 for the day. There were mutterings about poor publicity, and that may well have been the case. It was a shame, for there was much to engage with, giggle at, and be stimulated by over the course of the day’s events. Three days earlier I had been to a packed-out discussion at the Poetry Library about the poetry of writer BS Johnson, who may be a bit of a cult figure, but is certainly not a name on everyone’s lips. But that was London, and this was Guildford.