One Evening in October I Rowed out on the Lake: Tua Forsström, trans. David McDuff, Bloodaxe 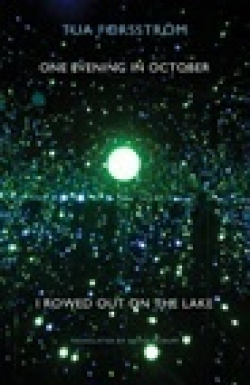 A brief sojourn in Finland is enough to teach the observer that the country is vast and largely uninhabited, for much of the year buried under ice and snow. Impossible then, for human beings not to be dominated by that environment; impossible also to imagine being an artist there and not being hugely influenced by those vast landscapes. The country is a place of extremes of cold, of days when night falls at 2pm, or endless day. A place where old gods are still remembered in midsummer fires.

Difficult also for an artist working in Finland perhaps not to be influenced by the work of Helsinki’s most famous son, the composer Sibelius. But we have been through a century of war and modernism since Sibelius wrote his romantic symphonic poem Finlandia. With Tua Forsström’s work we are firmly in the hands of a modernist poet who achieves her effects through a juxtaposition of images, who infuses her work with a poetic sorrow, with dreamscapes, the music of cold streams and icefields, advice from the poet’s child self to the adult.

There are four kinds of darkness and the wolf

Runs on strong paws through your dream   (p21)

The poet’s lines move effortlessly through time; we smell smoke on a jacket in the hallway, are taken back to childhood afternoons. There is a constant backdrop of weather, of snow and stars, the voices of water, of rain, darkness and kindness and all the while the natural world fades in and out of the foreground.

Split into their smallest parts the smallest

parts, what do you find?

The poet seems to ask: what is the shape of beauty now?  It has to be seen through human eyes to be understood. It is infused with who we are, who have become every day of our lives. Yes, we have magnificent forests and lakes but here too, am I, and to be honest there are days when I don’t feel so good.

I simply mean that the pictures are so disparate

In a way we can all be swapped round but we don’t swap ourselves round anything like often enough.  Don’t see the other’s point of view. Don’t help anything like as much as we should, maybe?  Don’t connect to our own time and place but feel constantly adrift.

These poems are shot through with pain and a kind of mourning that is enunciated in the poet’s own words as a "pure, raw longing".

The thing with sorrow is that one thought  there

This work references and is influenced by Japanese artist Yayoi Kusama whose installation piece ‘Gleaming Lights of the Soul’ graces the cover of Forsström’s book. It is unsurprising that the poet finds consonance between her own work and that of Kusama, this most influential and visionary avant-garde artist who has openly discussed her suffering with mental health problems and phobias (much of her latter life has been spent in hospital).  Anyone who has been fortunate enough to see a Kusama exhibition and stand in the middle of one of her “infinity net” installations is a step closer to understanding how little we understand about the universe we inhabit.

There are pictures that make it possible to see what

There are stars that are not visible and somewhere else

And my favourite lines in the book show the unbridgeable gap between information and wisdom:

Search-words: forest hare, found in abundance, no restrictions on shooting

But the hare’s heart is strong and pure

The hare has counted the injured

The hare knows who are hungry and have no home   (p73)

This book is a translation which puts a natural limitation to an English reader on investigating  the original poetry. However, we are fortunate that there is a translation to give us insight into the work of this poet/philosopher.

Tua Forsström, One Evening in October I Rowed out on the Lake, trans. David McDuff, Bloodaxe, £9.95