Out in the open: celebrating gay poetry, and its inspirations 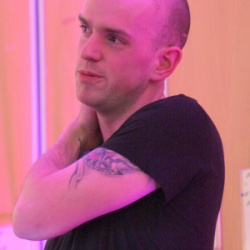 I’ve been to a couple of the Poetry Library’s Special Edition readings before, but had never seen the place so packed. The reading, marking LGBT history month,  was billed as ‘Hidden Desires, Hidden Literature’ – but the point was that, as Richard Scott said, “gay men’s poetry no longer has to be hidden in the UK”. Scott recalled growing up in the days of Section 28, when gay literature was banned from the school library, and spoke of a seismic shift since then: “My life and my reading life have changed dramatically in the last 20 years.”

Scott introduced five poets - Gregory Woods, Andrew McMillan, pictured, Keith Jarrett, Harry Burke and Maitreyabandhu – plus David Tait, on a video from China. The poets had been asked to read from and talk about other poets, from books found on the Poetry Library shelves. Andrew McMillan spoke of “coming out to my parents at the age of 16”. That night his father came up to his bedroom with a book, and said “he thought I ought to read it”. It was Thom Gunn, “the first love of my life, the enduring love of my life”, McMillan said.

Gunn emerged around the same time as Ted Hughes, but was regarded as “too American by the English, and too English by the Americans”, McMillan told the audience. He added: “I didn’t set out to write gay poetry – it’s just love poetry and confessional poetry.” He read a poem called ‘The Schoolboys’, about physical contact between boys, “before it’s sexual, when it’s just love”. In the poem a woman on a train finds their touching embarrassing, and McMillan links this to the burning of an effigy of Margaret Thatcher in his home village just outside Barnsley, that featured in the national news: “The woman coughs and sighs like a slowly punctured football … the boys move seats … the lady burns.”

Keith Jarrett told the audience: “I come from a performance tradition, and I like to know you’re here.“ He added: “I love this library, I’ve been lost in here so many times.”

He read poems about residing in an ‘ideal’ home, with an obligatory girlfriend –“there has to be a girlfriend / Her Upstairs, the missus” – and about gay dating phone apps. He finished with ‘A Gay Poem’, which you can find on YouTube. It concludes with these lines:  “They asked me to read out a poem / They said, "Choose one of your strongest / One of your best / Choose a poem that don't stand for any foolishness" / And they asked me if I had a gay poem ... / So I said / Yes.”

Jarrett is an upbeat, entertaining, heartwarming performer, and not afraid to change the mood by reminding us of other countries – say, Nigeria, Uganda, Ukraine, and Russia – where gay poetry would meet with quite a different reaction.

The lines in Harry Burke’s poems are short and sharp, like status updates – “I’m in Berlin again, I’m wondering who I am on the train” -  and are punctuated with observations about poetry itself: “I love the idea of people listening to poetry, and agreeing with it.” He said he hoped this thought was being noted down. It was. In another poem he said:  “Work is like writing a poem / Once you start you just want to get out of it / But you want to get out of it well … I don’t think explanation is poetry.”

David Tait, via video from China, read poetry by Edwin Morgan, but confessed that he had not written much himself “since coming here, except about air pollution”. He added that people said to him that he was “not writing gay poems any more  … I find that bizarre.” Having said that, he then read a poem, ‘The Stars and the Dragon’,  “about meeting the guy who’s the reason I’m living in China”.

Maitreyabandhu, who lives and works at the London Buddhist Centre, read poetry by the celebrated Constantine Cavafy, and his own ‘Reading Cavafy’, about his poetic hero, too. He also read extracts from a moving sequence about growing up in Henley-in-Arden, and his developing relationship from the age of eight to 16 with another boy, who was killed in a road accident. He said of these poems: “They are, of course,  unbearably sad … Nobody knew that I knew him. When I went to his funeral, nobody could understand why I was there.”

The reading concluded with Gregory Woods, a poet of great technical skill and wit, and one also not to be trifled with. He read from Whitman, and his own poems about Cavafy, Henry James, and Byron. One called ‘Mothers of Sons’ includes the lines: “Mothers of crybabies, mothers of mothers’ boys … your apricot kisses exacted a terrible toll.”

Woods’ website notes that in 1998 he was appointed professor of gay and lesbian studies at Nottingham Trent University, and adds: “Because this was the first such appointment in the UK, it attracted some attention. The then Conservative shadow home secretary Ann Widdecombe used the pages of the Sunday Mirror to denounce my career as ‘a phenomenal waste of public money’.” When a sentence in a review offended him, Woods included two bawdy, satirical poems in his most recent collection, An Ordinary Dog, as a riposte – and named the reviewer, too. A warning to us all.

The opening poem in this collection, ‘Invocation’, is addressed to the Muses, “who I think of as a gang of lesbian avengers”, he said at the Poetry Library. It concludes with these apt words: “Foregather where the tyrant hangs, / and harry anyone who brings / to human rights inhuman wrongs.” Well said.

The fact that "gay poetry" has a description
shows how far society has moved away from the
days of my own youth. The point about love
preceding sexual awareness has the ring of
truth and has its history in boys' books of
days when the word "bugger" was unmentionable
in polite society. Indeed, it is never used
today either, except as an expletive. I first
heard it uttered by a self-possessed elder
sister. She really put some force into it, I
recall! Its origins are interesting on
another level to a student of social history.
But, in general, poetry and literature covering homosexuality have been around in various forms for years, and in other times
were absorbed into the greater world of
writing as "art"...getting little public
awareness and thus avoiding widespread
obloquy in the process.
Wilde and his "love that dare not speak its name" certainly upset the horses of his day
and it was to be many decades before things
began to change following a courageous
peer's action to change the law about sexual
behaviour in society. Today's gay community
may have its problems but they are as nothing
compared to what was the "norm" previously.
Now that's something to write home about!