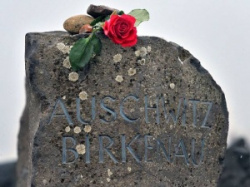 For those who are alive

To see the British newsreel

The heart of Germany -

The town of beauty and harmony.

All around seemed to have only charms.

In any case, up to the moment

When they felt the smell.

What the British saw entering the concentration camp

Was almost a complete surprise for them.

They couldn’t believe the people could do that.

The scenes they filmed were beyond any description,

Those facts were all delivered to the jurisdiction.

The film "Night will Fall" demonstrates

Some said they didn’t know,

Some didn’t want this film to show.

It’s hard to watch and hard to look away.

But it shouldn’t be repeated at any other day.

It was the humans heart frost,

It was the peoples action,

But the devils satisfaction.

Well done, Larisa, to bring this 'situation' so clearly into focus. I wonder whether you saw the British 'Holocaust Remembrance' ceremony. It was very explicit and gut-wrenching. They included the further atrocities of the Bosnian genocide, just one of many since 1945. It highlighted so effectively that our human race has still learned very little about co-habitation upon our small, unique (at the moment) planet.

It is through writing and talking about these events that we help prevent them from being repeated. Thanks for sharing

Thank you for marking this anniversary on Write Out Loud, Larisa.