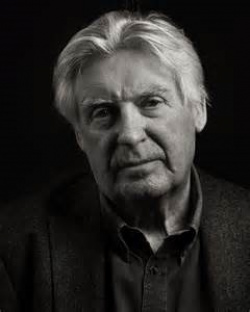 David Harsent has won this year’s £20,000 TS Eliot Prize, for his collection Fire Songs. Harsent is professor of creative writing at the University of Roehampton and a Fellow of the Royal Society of Literature. The prize is organised by the Poetry Book Society, and funded by TS Eliot's estate. At the special prize reading at the Southbank Centre in London on Sunday night, Harsent said one of the themes of Fire Songs was “the depredation of the planet”. Poems from the collection that he read on Sunday included ‘Icefield’ – “Now the horizon’s a smudge; now there’s a terrible weight / in the air and a stain cut hard and deep in the permafrost” – and ‘Bowland Beth’, about a hen harrier killed before she could breed. Harsent blamed gamekeepers for the fact that the hen harrier is “virtually extinct in this country … in France they’re like sparrows”.

Other themes in Fire Songs include images of martyrdom, book burning, war and decay. The award was announced at a ceremony at the Wallace Collection in London on Monday night. Harsent was described by the chair of the judging panel, the poet and novelist Helen Dunmore, as “a poet for dark and dangerous days”. She added: “Fire Songs plumbs language and emotion with technical brilliance and prophetic power.” Her fellow judges were Sean Borodale and Fiona Sampson.

Harsent has been on the TS Eliot Prize shortlist on four previous occasions. He has previously won the Griffin international poetry prize, the Cholmondely award, and the Forward prize. He also works in music theatre, and has collaborated with a number of composers, including Harrison Birtwistle.

Background: 'The intimacy of the poetry world'

◄ Still to publish? Could you be a Faber New Poet?

Interesting take on it all in this Times Literary Supplement blog http://timescolumns.typepad.com/stothard/2015/01/poets-win-prizes.html

'Bang on' is right! Glad you mentioned that timely article, Frances. Here's a link to it http://www.theguardian.com/environment/2015/jan/13/-sp-mystery-of-the-missing-hen-harriers

Thanks for this great summary Greg. David Harsent also mentioned that the reason Hen Harriers are persecuted is because they like to eat grouse. Grouse are a valuable part of the Scottish shooting season and it is part of the gamekeepers' job to protect the grouse so that various bankers etc can blast them to smithereens when the season starts! There's an article about it in the Guardian this morning so the 'Bowland Beth' poem was bang on topical - as well as being heartbreaking.