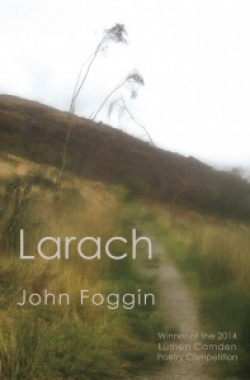 This pamphlet collection is the result of John Foggin winning the Lumen Camden poetry competition last year with his poem ‘Camera Obscura’. The prize is a chapbook of the winner’s poetry issued by Ward Wood Publishing, with the help of editor Adele Ward, a long-time supporter of Ruth O’Callaghan’s Lumen Camden readings that raise money for cold-weather shelters in Camden and King’s Cross.

Many of the poems, including the title poem, are about place; ‘Larach’ being the Gaelic word for something no longer there, “the ghost of a place”. Foggin is not a Scottish poet, and so he approaches the Highlands as an explorer, unearthing the spirits of the Clearances in ‘Boreaig’:

the burning of rooftrees, the nailing of doors;

the old woman dragged on a hurdle

to die in the lee of the stone;

There are other ghosts in this collection, too, including that of Emily Davison, the suffragette who died after falling in front of the King’s horse at the Derby in 1913. Foggin’s ‘Camera Obscura’, as well as winning the Lumen Camden competition, was highly commended in the Forward prizes. These are its last lines:

Until the image blurs, dissolves in silver flowers,

it’s there on celluloid in shades of grey;

the camera only says that in that instant

you are dying, and everyone has looked away.

Ted Hughes prowls these pages, too.  In notes about another poem written while Foggin was tramping about the hillls of Scotland, and Skye in particular, he reveals that the beginnings of it came to him on a day he subsequently discovered to be that on which Hughes had died: “You watched and talked all that wet day, / your gritstone vowels, your cadences / open as the sky; falling for ever.” (‘Achnacloich: October 1998’). Quotations from Remains of Elmet and Moortown have been stitched into the poem. There’s another nod to Hughes in ‘The fox on the window sill’: “Light comes through the paper lantern / of her shoulder bone; / translucent, my fox, / with not a thought in her head.”

And one more ghost. ‘Our David’s pictures’ is about Foggin's adopted son, who died soon after his 21st birthday, and as a younger boy, made meticulous pictures of battle scenes: “In tracing the anatomy of war / our David’s concentration is absolute. / He kneels in peace, head bowed.”

This is a slim volume, but there is much to it. The language and music of Foggin’s poetry has a deceptive simplicity. It is also muscular and effective, constantly seeking to dig beneath the surface of things: “The land shifts, won’t be fixed, // The metalled road will crumble // the maps will need redrawing”. (‘Suishnish’).  Larach is a beautifully produced chapbook, and remarkably cheap at £3, with all proceeds going to help the cold-weather shelters. The 2015 Lumen and Camden poetry competition is still open for entries. The judge is George Szirtes, and the deadline is 14 February. Greg Freeman

A marvellous review Greg, of what sounds like a wonderfully atmospheric set of poems.