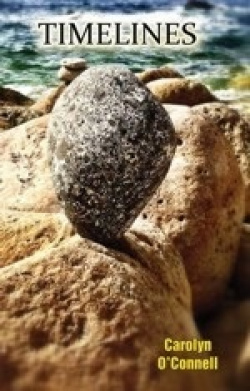 Journeys are a feature of this collection – many of the poems contain lines that operate as reflections on the passing of time, mostly in the context of generations within and beyond a particular family.  The real journey of the poems take place in time and memory rather than space.  In ‘Night Ride’ a daughter returns from abroad, her “belly large with new life” as a reflection in a driving mirror gives rise to thoughts on family and history. In ‘Before the Wedding’ a mother watches her daughter’s preparations for her wedding:

I watch her as she dresses now

knowing how my mother felt

when I put on such a dress …

while other poems connect the lives of three women from different generations.

the cane had shone with planes of polish spread

by generations of women …

they were two brothers [who] had fought …

against a common foe. …

somewhere in the army

are two men I have never met

I spoke to them when they rang …

asked for my daughter …

as my mother studied the news

Water frequently makes an appearance.  In ‘Summer Pond’ the poet reflects that “water was my life … my source is water” while  ‘River Find’  and ‘Riverside’ again use water to set the scene for considerations of the passage of time.

Soldiers past and present make frequent appearances too, some as elegies (‘Not Embraced’ and ‘Petals’) but more often as part of the texture of the past. Clothing also evokes memories. Items such as “a new southern overcoat” (‘In The North’), “a pearl-hazed dress” (‘Before the Wedding’) and “Edwardian ruffles” (‘Traces of Time’) are all used to explore the theme.

In line with the collection’s title, the poetry is much concerned with the passing of time:  the fact of it, its effects, the way it passes through human beings, changing them; the pain it causes – children growing up and leaving home, the pleasure it sometimes affords – children growing to become adults; decay and mortality.

The subject matter is mostly domestic or related to a domestic world, and none the worse for that.  The poetry is consistent and coherent in its exploration of time.  But it does seem to me that many of the poems could do with tightening to reach their full potential.

Some extra pruning would have been beneficial, especially when the poems are over-explained.  Readers need to be left space in which to make their own interpretations.  In ‘Water Memories’ too much explanation of the “memory/island” metaphor detracts from what is otherwise a good poem.  Similarly in ‘Traces of Time’ the reader doesn’t need the first lines “the watch … counted the lives of three women”, since the rest of the poem makes this clear. Again in ‘Summer Pond’, “as the captain commented” is a  superfluous detail. The poems sometimes become a little clogged and this can edge them away from poetry and towards prose.

There are too many clichés -  “age-old”, “common foe”, “long gone”, a whistling wind and flashing eyes - and some words feel out of register , such as “squealed”,  and “cavorting”.  There also appear to be some editing problems.  “The fields deserted tumble green cropping rock” (‘Grey Man’), “strands broken fishing wire” (‘River Find’), “on the big screen a silent flat screen” (‘Waiting’) – it seems to me unlikely that what’s printed reflects what was written.

This is a welcome collection of poems exploring the effects of time in a mostly domestic setting.  But some trimming and further editing are needed to bring out their full potential.

I'd like to question one of the statements in this review. I don't think "Readers need to be left space in which to make their own interpretations" can be applied without qualification. The great war poems of Sassoon or Owen don't leave much open to doubt or vagueness, for instance; nor would we expect them to. Some subjects are too important for that. Is Robin Thomas arguing against clarity, and saying that all poems need to be unpicked in some way, to get at their meaning?