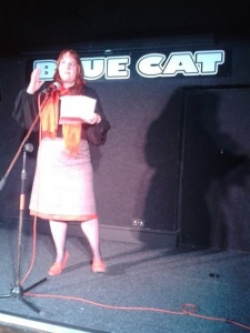 Sarah L Dixon’s inspired Quiet Compere poetry tour giving 10 poets 10 minutes each to read at every venue bade farewell to 2014 with a night at the Blue Cat Cafe in Heaton Moor, Stockport.

It was a buzzing evening – right on my doorstep – and although Sarah had suggested a topic of “volume”, an eclectic mix of subjects added spice and humour to a vibrant mix.

Sarah sparked each half with words of her own including a charming poem about her son, ‘Baking With Frank’, an elegy to Buttermere in the Lake District, a touching piece about babysitting and a warm evocation of her youth with ‘If You Expect Your Home Town  to be the Same as in 1989’.

The accomplished Joy Winkler read about sharing a bed with another person and a bolster (remember them?) “coiled around like a kiss-curl”. From her collection Stolen Rowan Berries she recalled May Day at school with ‘Maying’ and her mum’s difficulty pronouncing certain words with ‘In A Name’. She also produced one of my favourites of the evening, ‘Judy’ - not inspired by me but by Mrs Punch. Clever, funny, superbly composed.

Zach Roddis read from some of his collection of tweets, many inspired by his dad watching Batman’s The Dark Knight Rises with its baddie Bane and his deep, reverberating voice. Some of work was deliberately repetitive but with a tendency to tedium.  His longer pieces such as ‘Nostalgia’ and ‘YOLO’ showed there was a better poet trying to get out.

He was followed by Bill Tait, who jokingly referred to himself as Zach's "dad", and who was quite the opposite – dense language, complex ideas and elaborate verse forms. ‘Wise Men Needed in Manchester’ was clever and ‘Migrants to Britain’ thought-provoking, and they needed closer examination than one reading aloud.

Janet Rogerson read another of my favourites, ‘Watching Jaws With Louis’, about the endless questioning of her son during the film, including the repeated one we all asked at the time: “Why don’t they close the beach?”. Sheer genius and great fun. Nice one, Louis. She also read one about a group of Walt Whitman fans in Bolton called ‘Over The Sea To Eagle Street’.  ‘The Egg’ included a rhyme she had dreamed about (palaeontology and alien autopsy) while ‘Strawberries’ evoked a lost world of young romance and hope which was touching and memorable.

Sarah Maxwell’s selection involved her complex persona of grandmother, microbiologist and vicar’s wife with ‘Walking to the Park with Chloe’, ‘Bug’, which was both clever and funny, and ‘Waiting for God’ (was that the first poetic mention of Ebola, I wondered) and finished with a moving and sharp ‘Boxing Day 2003’.

I found Solomon Scribble’s haikus less successful, but his play on car registration plates was funny and witty and ‘The Wasp King’ was well crafted with echoes of John Cooper Clarke rhythms.

Helen Clare, pictured, did tackle the idea of volume with ‘Gentle’, a beautiful piece inspired by a boy to whom the word does not really apply, and ‘20 Minutes From New Street’. I loved her memoir to her father  and his modelling hobby in ‘Dad as Frankenstein’ and she revealed her fascination with insects (soon to be launched in a collection) via ‘Assassin Bug’, ‘The Manchester Moth’ and ‘The Common Wasp’ (the second wasp verse of the night).

Steph Portersmith showed her great descriptive skills in ‘Fabulous Cranes’ and ‘Karaoke in The Hope and Anchor’, and her poem about the area where she was brought up ‘The Ambush Street Sonnet’ was superb:  “Outside it’s poor / Inside it’s class”. Her piece about volunteering in a home for people with dementia was touching, with her singing for a lady “with Twiglet fingers”.

The accomplished and experimental Philip Davenport read a stunning poem about his experience of sitting in on a war crimes trial, ‘Without Love We Are No Thing’. It was very uncomfortable and deserves closer study.

Dominic Berry dismissed any suggestions of a quiet fadeout to the evening with his in-your-face and heart-on-his-sleeve poems about his mum and bullying – ‘Solid With Stardust’ and ‘Men in Suits, Boys in School Uniform’. But he also writes for children (and works in schools) and his finale about a dragon captured inside his maths homework book was genius.

A wonderful and warm evening with some truly outstanding poetry. Roll on the 2015 tour!

Background: Quiet Compere looks back on her poetry tour