Nerves in York, laid-back in Brum, triumph in Blackpool: Quiet Compere looks back on her poetry tour 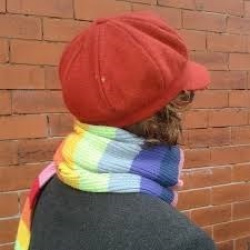 What gave her the idea? She had been running regular poetry nights in Chorlton, Manchester since 2009. They “morphed into a 10 poets x 10 minutes format quite quickly. This balance of poets and time of sets worked well. Ten minutes is long enough to get a good idea of the poet's work/style, but if one poet is not to our taste the next one might be.”

Then the outside world intervened. “When my 17 years’ employment in the NHS came to an abrupt end, a neighbour needed someone to do their spreadsheets, my son, Frank was due start school nursery and these two factors meant I had time to try and shape my life a little, rather than diving straight back into what I had always known, a public sector 9-5 since I was 19.”

She had already been inspired by a master class run by leading performance poet Tony Walsh, titled Get Heard! Get Seen! Get Noticed. “I took masses of hope from this. One of the things he mentioned at this Apples and Snakes session was applying for funding and where to apply for it. I had made vague notes while thinking that this wasn't relevant to me. I felt funding was for touring poets who were either verging on comedy, or performance-style poets. However, after the job finished I re-thought this and decided to apply for funding to tour the 10 x 10 minute format, rather than as myself. I booked all the venues and half the poets before submitting my bid and pacing for six weeks as I awaited a reply. I also decided to call myself the Quiet Compere.”

How does it work? “I choose poets local to the city, but from different groups and choose a line-up that often mixes the established and strong newcomers, all age ranges and performance and page. What I don't want to do is to pick all the poets who always read with each other every month, but bring together different groups, reunite old friends and encourage new ones.”

And how has it gone? “I was delirious after the Manchester launch went so well, and raring for the rest of the tour. The hardest thing with Manchester was to choose the line-up. York was the first gig away from home, so stuffed with nerves. Birmingham had 10 poets I had never met who were so friendly I was, bizarrely, the most laid-back of the whole tour. Kendal and Newcastle were joint nights where I didn't know if the hosts and I were going to gel. No need to worry.  Liverpool was quiet but held some brilliant new poetry friends for me and I know some old friends found each other again here. Leeds surprised me by one performer adding a piano and pianist, which was a lovely touch, but with very little notice which panicked me slightly.

“The absolute triumph was Blackpool. Only four tickets were sold the day before and on the day I arrived at the venue to find no mic was set up, but the venue was stunning for the fee, was one of the lowest on the tour. I think the fact that Joy France organised a Feral Poets on the Comedy Carpet in front of the tower and some of us met there in the afternoon and that it was a Bank Holiday Friday in Blackpool already lent it a fizz. Then when the audience filled the room and the 50-seater venue sold out I was buzzing and the line-up of poets balanced page and performance so beautifully, the audience were respectfully silent when called on to be, and hysterically raucous when the poets encouraged them to be.”

Does she get a chance to perform her own poetry at the gigs?  “Mostly men ask for later in the second-half slots, and mostly women ask for first-half slots, but not first on. Just an observation and not always true. However, it means that I have the excuse to perform two or three of my own poems at the beginning of each half and introduce the Quiet Compere concept, which also means introducing poets purely by name and letting their poems talk. Long and detailed introductions to poets always make me uncomfortable as an audience member and as a guest poet. Instead, I do the research into the poets and post links to their blogs, biogs, web pages, publications or videos on the event page in advance of the event and have flyers available with the list of names on in case the audience do not have access to the event page.”

So does the success of the Quiet Compere tour mean she has identified a gap in the poetry market? “Hopefully. I think the one thing I have on my side is viewing the poetry scenes of the different cities from a distance, which means I will not pick those who always perform together. Mixing performance and page often works well and is refreshing for the poets and the audience, and keeps attention. Mixing established performers and those strong newcomers or regular open micers who may not have had the chance of a full guest slot yet means the level of support in the room is high and they are all encouraged by feedback from each other and me. Also, I gave performers the task of writing a poem with the theme of ‘volume’ around 30% took me up on this challenge. Next year's theme is ‘Space’.

“The tour has been incredibly rewarding, as well as meeting new poets as performers and in the audience and traveling to new places. Although often this meant a rushed taxi or a bustle with phone maps to the venue at both ends of the event and not much time to explore, I managed to get a feel for a few new places and hope to revisit the poetry and the cities some time soon. The pay-off of all the admin work, which I enjoy, is that the events feel like they run themselves once you have organised well, got the right poets, the right venue and perfected the running order. This is not always the case, but when it goes smoothly the host can sit back and let the night unfold.”

Would she be glad of a rest after the Stockport gig? “Well, I run on adrenalin so am unlikely to slow down to a stop - otherwise tonsillitis and norovirus might lie in wait. After Stockport and Tour Conclusion blog are written I can have a rest until 10 February when my next night is in Chorlton, Quiet quiet LOUD! at the Lloyds Bar, with Gerry Potter, Abi Hynes and Ian Whiteley. Then its back to the national tour, with the first date of 2015 in Halifax on 5 March jointly hosting Spoken Weird with Genevieve Walsh … Lots of Christmas make and do with my four-year old, Frank, and time to enjoy Christmas excitement too. Vague plans I have for this break time: go to see the sea in the winter.  Preparing a pamphlet collection to send off - maybe quite a bit of editing and polishing of 115 poems (so far) from Jo Bell's 52 project.”

And feedback? This from Rebecca Audra Smith, one of the performers at Manchester’s Quiet Compere, and host of Stirred, in Manchester: "It was an inspiring event to be part of, and it felt like it solidified links between people. It fed into the local open mic nights that happen around Manchester in an oblique but important way."