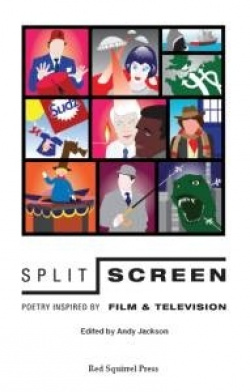 There are lots of poetry anthologies out there these days; some good, some middling, some not so great. But Split Screen - poems inspired by film and television and edited by Andy Jackson - is an anthology that rings bells, strikes chords, and pulls legs, whether you’re a certain age or not, and I heartily recommend it as an inspired, something-different Christmas present.

It includes commissioned work from poets including George Szirtes, Simon Barraclough, WN Herbert, Ian McMillan, Luke Wright, Jo Bell, Helen Ivory, and Angela Topping, and features treasured programmes and films such as Doctor Who, Camberwick Green, The Clangers, Blakes 7, Tom and Jerry, Bond movies, the Carry On films, Dad’s Army, and Coronation Street. The poems are presented in sections, interspersed with others inspired by adverts acting as commercial breaks, the latter selected from submissions from around the UK.

“What was he on, we wondered, seriously stoned,

as the 70s progressed unchecked? That lit-up smile

And Tim Turnbull’s clear-eyed celebration of the leading male members of the cast of Carry On Cleo:

and yes Kenny, they have got it in for you.”

Two poems feature perhaps Britain’s funniest comedy duo after Morecambe and Wise, Peter Cook and Dudley Moore. Martin Figura’s poem centres on the notorious and then-shocking Derek and Clive albums, including accounts of lobsters and Jayne Mansfield, which you could only risk listening to with the bedroom door firmly shut:

“mum taps on the door.

Perhaps we can hear my LP while we eat,

(Tea With Derek and Clive)

On the other hand, as it were - indeed, on the opposite page - is Anne Berkeley’s Dud, examining their relationship through the eyes of a deceased Pete, with a sharp reference to one of their best-remembered sketches, and Dud’s club foot:

“I never belittled him. Of course

he looked up to me, being himself

somewhat lacking in the leg division.

I had nothing against the other one.”

The poems are generally as clear and as bright as that blinking set in the corner of the room, which, during times when we still needed TV repairmen, occasionally had its off days. Interestingly, I found the poems about films generally more complex than the TV ones. And coincidentally or not, I must confess to a preference for the poems about fallible TV characters, rather than screen goddesses. Alan Buckley’s affectionate Walmington-on Sea acknowledges the cosy familiarity of Dad’s Army:

“how gladly we fell into the

womb of your church hall”

and the humour of the class conflict between the “lower-middle-class bluff” of Captain Mainwaring, and the “arched eyebrow” of Sergeant Wilson.

There’s even a sense of military nostalgia as Catherine Smith’s Barmaids admires the role models of Weatherfield’s Rovers Return, proper characters all,

“who have served loyally under fierce generals

and dishonest officers; who have offered comfort

to the shell-shocked, the battle-scarred”

Other highlights include Paul McGrane’s poignant tribute to Tommy Cooper, And The Doctor Says, which, as you might expect, is crammed with jokes. Mention must also be made of the book’s “rather wonderful” cover art by Paul Mawson, as Andy Jackson acknowledges in his foreword.

Do not adjust your set. This is a book that conjures up an analogue, pre-Sky world and TVs that sometimes you had to thump. It’s an anthology that you will keep returning to, and would make the ideal gift for someone you know who is suspicious of non-rhyming poetry. I just hope I haven’t given away too many of the punchlines. Greg Freeman

◄ Nerves in York, laid-back in Brum, triumph in Blackpool: Quiet Compere looks back on her poetry tour