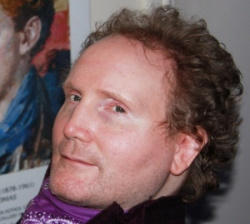 Tetraplegic poet Owen Lowery has spoken of the problems of performing poems while on a ventilator, in an interview with the BBC. Lowery, a former judo champion whose injury in the ring during a charity tournament at the age of 18 left him paralysed below the shoulder, said that being on a ventilator “has a big impact on your reading and your performance of poems”.

His ventilator is programmed to take breaths for him at set intervals which can make it tricky to read his work aloud. "I was a bit nervy at first," he said, "because I thought that the gaps between breaths would be too obvious and too long."

He added that that being on a ventilator is like breathing passively. "It's done for you, without you having to think about it. You have to wait for it. When I perform, I try and be aware of it and almost use it as an advantage to make people think about what I am saying. But in general, when you've been on it quite a long time, you almost forget it's there."

Lowery, who is 46 and lives in Lancashire, began writing poems seven years ago on a university course and started to perform them for audiences in 2012 after an Arts Council grant made live shows possible. He brought in a musician, a producer and a film-maker to create a poetry performance which is accompanied by music and animation.

He spends time practising before a performance to work out where his breathing will kick in, so he doesn't get caught out in the middle of a line. "You want the pauses to occur at fairly natural places," he says. "It's about pacing yourself out. Like doing a musical score and figuring out where to put the breaks."

After his accident Lowery's parents moved from Reading to Lancashire to help him. He went on to gain a first-class honours degree in humanities from the Open University followed by two master's degrees, one in military studies and another in creative writing. He is currently working towards gaining a PhD on second world war poet Keith Douglas.

Lowery’s poetry has appeared in Stand and PN Review, and he has been listed in the Bridport prize, the Welsh Open poetry competition, the Virginia Warbey prize, and the International Sonnet Competition. His first collection, Otherwise Unchanged, is published by Carcanet.

He met his wife, Jayne, when she began working as his carer. They got married last year and Jayne reads some of the poems in the live shows, and often takes notes for Lowery if something inspires him when they are out together. You can read the full BBC article here.

Lowery will perform poems from Otherwise Unchanged on 4 December at Liverpool's Bluecoat. More details Another disabled poet, Penny Pepper, is performing at the Bluecoat on 3 December. Both events are part of DaDaFest.

◄ Remembering Salford's past - and fighting to save a library