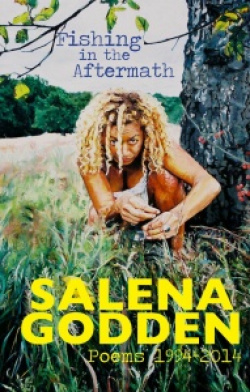 This collection marks 20 years of poetry and performance by Salena Godden, though the majority of the work included has never been previously published, which is surprising, given the quality.

Hailing from Hastings, Godden relocated to London early on, renaming herself Salena Saliva and learning the “art of hustling” along the way. Heavily influenced by Charles Bukowski, her poems apparently carry the flavours associated with that writer. However, this reviewer never quite got beyond the misogyny of his novel Women, and so cannot compare.

Upon ripping open the packaging, my attention was immediately arrested by the artwork on the cover of the book. Now, I know the saying goes that you should never judge a book by its cover, but I’m with Doris Lessing on this – I have always found it to be rather useful.

Although the introductions are a little spoiled by a number of typos, the poems are not, and the reader is catapulted into a world of filth, froth, fury, energy and fire in the belly.

‘Tick No Box’, the second poem in, made me laugh and smile wryly in recognition of a certain attitude that poets face out in the real world:

Poetry is the poor cousin

at the wedding of real writing;

journalists and authors and comedians

and playwrights and broadcasters are real writing.

Poetry is hardly ever asked to sit at the big table with real writing,

rarely passed the gravy or the bread,

never given an actual plate or cutlery.

These poems are clever, accessible, and the phrase “in your face” could have been created purely for them.  I don’t believe I’ve ever read or heard a poem on the subject of cervical smear tests, but I have now, and within ‘Cervical Smear’ there is a line about the use of mayonnaise that had me actually guffawing to myself.  A brilliant poem that all women should read.  I will quote this now, and turn away whilst you wince:

Now breathe slowly while I insert

some broken glass covered in dirt,

and twist and spring catch it wide,

with fourteen mirrors and spoons inside.

Oh, she knows all right.

‘The Last Big Drinky’ – well, you could describe this as somewhat of a chaotic piece of prose poetry, but that just doesn’t do it justice. I would say that this is a swirling whirling kaleidoscopic psychedelic reading “experience”, a rolling rollicking pell-mell of a booze-soaked drug-fuelled orgy soaked in sweat, snot, blood, tears and erm, other bodily secretions.  Almost hallucinogenic in its intensity, there aren’t many pieces that make me think “Wow – I so wish I’d been there to hear that!”. It must have been like a bomb going off in every room she performed this. I may even have panted a little when I reached the end. And I swear my liver throbbed.

‘A Loner in a Crowded Head’ is a beautifully crafted poem, one that defies expectations of “performance poetry”.  It sings, weeps, it’s alive, and drips with tangible memories:

I cried secretly, like a bulimic in a toilet cubicle,

my fingers down the throat of how it troubled me

that love was failing.

I smeared lipstick on a forced smile,

my blood shot and salt eyes,

I pass pubs we once knew

and the flats we shared

where the rent was always overdue.

Where it was always late,

long nights of whiskey and coke,

when the dawn scribbled gold

the smoke a shade of amber.

And so to another romp!  ‘Fuck Tea, Fuck Toast’ begins in a way that is reminiscent of Irvine Welsh’s Trainspotting - "fuck being safe, fuck playing safe. in fact fuck playing. fuck being careful. fuck giving a fuck.”

And so on. You get the picture. However, this prose piece then turns your expectations upside down, as it  morphs into a wistful analysis of the ageing process, full of insight, hard-won maturity, and world-weariness. This is something Salena Godden is an absolute master of – knowing your assumptions, playing to them, and then flipping them completely.

An extremely high standard of insult is contained within ‘A Letter to an Air Stewardess Found in the Back of Seat 67A’.  This hysterically funny piece is based around the refusal of said air stewardess to lend Godden a pen. As all writers will know, when that moment of inspiration strikes, it HAS to be noted down, or risks being lost forever. This piece is cleverly structured  – a poem within a poem, and appearing to be a ‘found’ piece.  “Dearest Sky Barmaid” had me tittering, but trust me, the insults get far worse (and funnier, and more blistering) than that.

What surely has to be a very knowing nod towards the legendary poem by John Cooper Clarke, Godden’s ‘Twat’ (pun intended) uses the word not once, as in the original, but constantly throughout the piece, to the point that the repetition ensures all meaning is lost. Is it big, funny, or clever?  Yes, very.

One of this reviewer’s favourites is the gentle ‘Swan’, a dreamy poem about growing old together with your lover, resonant with tender intimacy:

A skein of geese flock overhead,

but you and me, we never migrated apart.

Together we become weathered

and soft as old cotton and as yellow as warm butter.

Snow flutters like feathers past the frosty winter windows.

Face to face, we lie on the cool side of the pillow,

My fingers play with the silver hair at your temples,

you stroke my face and I breathe slowly.

‘I Want Love’ is another instance of it leaving the word devoid of meaning, and the poem takes a sinister turn at the end.

As with so much of her work, the first line of ‘The End of the World as We Knew It’ is so heavily pregnant with potential that it’s on gas and air, screaming in the labour ward: “The Puerto Rican coke dealer and I were an unlikely team.”

I keep imagining the audience response as she pauses (which she surely must) after delivering this line, wondering if they laughed, and then whether they burned with guilt or shame when they heard the rest of it. I’m willing to bet there was a stunned silence at the end, right before the applause.

‘Milk Thistle and Juniper’ has a dense, dark, sinister nursery rhyme feel to it, and is reminiscent of Joyce’s Ulysses in its syntax. There are also echoes of old Irish storytelling around the fire to it. Gave me shivers. A wonderful poem, and also one of my favourites.

Never assume anything with this collection. It is full of the most glorious and satisfying surprises and twists, and will have you reeling long after you’ve put the book down. Who says performance poems don’t translate to the page? Not Burning Eye, and not me, that’s for sure.

◄ Roger McGough to talk about poetry and pop at the Troubadour

This is a wonderful review Laura, superbly crafted.

Aye Rodney - would love to see her do her stuff. Seen a few youtube vids, but there's nowt like seeing people actually perform eh? There's an energy in live performances, that is missing in the virtual performance.

Nice review. Salena is good on the page and even better in performance.

Great review Laura - it's rare that reviews make me want to reach for my wallet and buy a book, but this one does. I love the proof that performance poetry CAN work on the page too!

A woman who takes no prisoners...much like your good self x