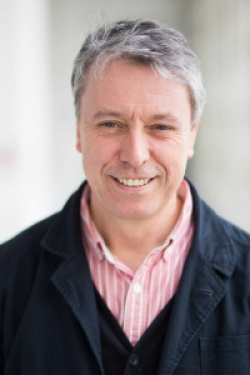 A dramatisation of poetry from Bloodaxe's The Hundred Years’ War anthology, focusing on around three dozen poems from more than 500 in the book, covering conflicts from the first world war to today’s terrorism, will be premiered at Coventry’s Belgrade theatre on Friday 31 October before embarking on a nationwide tour that goes on into 2015. Greg Freeman talks to Jonathan Davidson, producer of the show, on the challenges involved in performing a poetry show of this kind.

How did you become involved in The Hundred Years' War?

My involvement in this type of work goes back nearly 30 years. I saw Bertolt Brecht's son-in-law, Ekkehard Schall, perform his father-in-law's poems in Leicester in 1986 (I think it was) and this performance stayed with me. Schall knew the poems by heart, he released them as if they were moving through him physically, but he was not “being” Brecht and he didn't introduce or excuse the poems. Even having to read them in English translation, as they were performed by Schall, took nothing from the experience. I directed a small performance of poems with two performers at college that same year, but it took another 15 years to be in the position to produce a full performance inspired by the spirit of Schall's performance.

In the late 1990s I had run a number of training projects with literature event producers and performance practitioners (a director, actors, musicians, dancers, etc.) and these showed promise. Sometime later Bloodaxe Books published Staying Alive, the first of their ground-breaking anthologies, and I realised that we were on the same journey, trying to release the very best poetry for readers and audiences. When I approached Neil Astley and Simon Thirsk of Bloodaxe, they were enthusiastic about a performance using poems in Staying Alive. I took the role of producer, finding the money, selling the show to venues, selecting the poems and pulling together a creative team, led by the theatre director Steve Byrne. The show was rather good; audiences were astonished at how powerful quite complex, literary poetry could be when released as a performance, with subtle use of music, lighting and images, and performed from memory.

The Hundred Years' War is the fifth show I've produced, each a development but all adhering to the same principles: release the poem, respect the text, use only the text. We use Arts Council England funding and earned income from venues to fund the development and the touring. We currently have a very good co-production relationship with the Belgrade theatre in Coventry and most of the creative team are local - this is very much a performance 'Made in the Midlands', one of many good things to come out of this region. Bloodaxe Books are our other major co-producer, and for this show we have worked very closely with them in selecting poems and arranging and paying for performance rights.

What are the challenges involved in such a production?

The core challenge is to release the poems selected in the most direct way possible, using the resources at our disposal. It is as simple - and therefore complicated - as that, and everyone on the creative team knows that that is all we are trying to do. We auditioned 20 performers and are working with three. Over 60 performers applied so this was a drawn-out process, but good casting is vital; that mixture of voices, physicality, gender and age is needed to be able to release the poems effectively, but also to bring something unique to each poem. The other challenge, at the other end of the spectrum, is selling the production to venues around the UK. Our previous show, Being Human, was exceptionally well-received and did good box office, so it has been reasonably easy this time, but there are still venues that are unnerved by a “poetry show” and festivals that are reluctant to stage a literature event that doesn't directly feature writers or poets.

How did you select the poems that you have focused on from such a vast number in the anthology, and how long did it take to do so?

Of course selecting 35 or so poems from an anthology of 500 is extremely difficult. They all have merit but we need to think about the practicalities; it would be strange to have only poems from WW2 or Vietnam, permission to use each poem needs to be sought, and of course our three performers have to learn the poems by heart, and learn them with 100% accuracy. We are also looking for some kind of dramatic structure to reveal itself. There are poems from very different times that seem to speak to each other, that have more impact when placed together. The whole process took several months, working with Neil and Simon at Bloodaxe, with Steve Byrne, our performance director, with Antonia Beck and Jade Cancelliere, our producer and trainee producer, and finally with our three performers, Miriam Edwards, Jill Dowse and Zachery Price.

Can you tell us more about the format of the performance?

We are about to go into rehearsal and will make the show over a two-week period, so much is unknown. What I do know is that the poems used will be presented in a sequence that offers a series of challenges or illuminations. We won't be using the poems in chronological order and we won't be offering background notes (The Hundred Years' War book offers these, and excellent they are). All the poems will be performed from memory by our performers. There may be some live and recorded music, there may be some still and moving images, there will be some silence. Whatever is required to release the poems will be used.

How does it feel to be performing The Hundred Years' War so close to Remembrance Day?

Certain the centenary of the start of WW1 was in our minds when we started this project, but more because we wanted to offer alternative stories about war, the poems from WW1 that might not be heard often, and the poems from the forgotten wars. More importantly, we wanted to share the extraordinary humanity that poets have shown when writing about their own experiences and those of others. This will, I am certain, be an emotionally draining production. However, the focus will be on the poems and our reaction to them, rather than on any individual on the stage or involved in the performance. The poems are the only really important thing about this performance, making sure they are shared, keeping these voices alive.