Suits you, sir: footslogging poet Joe is a winner as he sells new poems on the streets 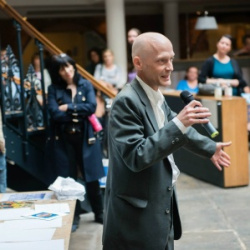 Wandering poet Joe Nodus as you’ve never seen him before … in a suit. The footslogging poet, whose epic journey, mainly on foot, from the north to London and back earlier this year, was reported in Write Out Loud, has now published a new collection of poems, which he is once more selling to earn a living. This picture shows Joe performing recently on his home turf in Leeds at the Corn Exchange, clad in a £2 suit from a hospice shop.

Joe, who has regularly hiked long distances to poetry events in the past, was appearing at the Art of Recovery event, after winning first prize in his category for poems submitted from his Bulrushes pamphlet collection.

His new, self-published pamphlet, Krispy Kreme, features poems such as ‘Tumour & Fries’, ‘Myth of Hip’, and ‘Health Advice’ that reflect his distaste for modern consumerism and junk food. Joe said: “Twelve of the 24 poems are from this year, mostly written since March 11, when I went self-employed. 'Get Up & Go' was written, before getting out of bed, the morning of my first day selling poetry, on the streets of Leeds. I sold one book that day. Since then, I've learned sales technique, and can sell up to 40 a day, depending on the crowds.”

◄ Waiting for the dawn: lyrical perfection from Alice Oswald

Thanks Greg Freeman, for this article; & thanks Daniel Dwyran for the lovely comment. If anyone is within travelling distance of Bradford on Friday 17th October; my new booklet should be available at Glyde House, Gldegate, Bradford BD5 OBQ at the Sentimentalists gig, only £3 entry fee, for an excellent band, with great music & lyrics http://www.sentimentalists.co.uk/live-dates.html

If you can't make it there, look out for a scruffy looking bloke (me) on the streets of Leeds, holding up an A5 booklet & saying 'excuse me please, could I interest you in reading my poetry'. My most regular pitch is on Woodhouse Lane near Becket University, between 3 & 6pm, but since I'm only there when I can make it; don't travel miles trying to find me. You can send me an email if you want a copy: yunojo@hotmail.com

A great article on a unique purveyor of the spoken word. If his exploits do not inspire or give you a large portion of the feel good factor... check for an appointment with your GP!
"Go Joe"!