The poetry news, from Sleepy Hollow and Greenwich Village 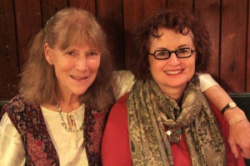 Margo Taft Stever, pictured left, great-great niece of US president William Howard Taft (1857-1930), runs Slapering Hol Press, the imprint of Hudson Valley Writers Centre, in Sleepy Hollow, Westchester County, New York. The press specialises in producing beautiful editions of chapbooks (pamphlets) by emerging poets, and anthologies.  She and fellow poet Susana H Case, right – whose poetry collections include one titled Elvis Presley’s Hips & Mick Jagger’s Lips - were in London to read at the Troubadour with six other US poets, and had got in touch with Write Out Loud in advance to let it be known that they would be in town.

We were able to have a brief chat upstairs before the readings, to share views about the poetry scene in the US and in Britain. Both women feel the US poetry scene is unfairly dominated by men – and there are publication stats to prove it - and Margo added that she felt that the American poetry world was as much in thrall to “celebrity culture” as US society as a whole.

I responded by saying that we have four women laureates in the UK – Carol Ann Duffy, Liz Lochhead, Gillian Clarke, and Sinead Morrissey – and also a thriving live poetry scene that doesn’t particularly doff its cap to “celebrities”. Susana, who later read from her current collection, 4 Rms w Vu,   acknowledged that performance poetry seemed stronger in the UK than in America.

Coffee-House Poetry’s host, Anne-Marie Fyfe, said she had read with Susana at Hudson Valley Writers Centre, in a converted railway station waiting room – Philipse Manor railroad station, overlooking the Hudson river, to be precise - which sounds like a superb venue to me. Both Susana and Margo had also read with Anne-Marie at the Yippie Museum Cafe, on New York’s Bleecker Street, and Susana has read at the Lunar Walk Poetry Series in Brooklyn, where many established poets take part in the open mic.

Does the Troubadour have its equivalent in New York? Margo, whose 2012 collection is called The Hudson Line, said it did – the Cornelia Street Cafe, in Greenwich Village, where the poetry similarly takes place in the basement.

At 10.30pm, after a packed programme of readings at the Troubadour on Monday night, Susana told me: “There’s another difference – US poetry events never start on time.” Hmm.