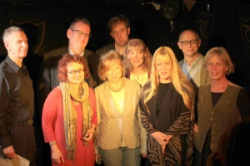 Billy Collins, Sharon Olds, Jorie Graham and CK Willams are just some of the host of American names that have appeared at the famous Troubadour poetry venue in west London over the years. You can now add a further eight to the roll call, after an evening of Stateside poetry at Coffee-House Poetry at the Troubadour on Monday night.

Host Anne-Marie Fyfe, who regularly visits the United States, said:  “We don’t hear enough US poets on this side of the Atlantic,” in introducing Monday night’s poets, many of whom she has met and read with in Greenwich Village cafes and coffee bars.

Robet Peake, who has been living in England since 2011, read poems from his Poetry Salzburg pamphlet, The Silence Teacher, about the loss of his baby son, including ‘The Spider’ – “it is as if he were never there at all” -  and from his forthcoming collection, The Knowledge, a nod to the cab-driver’s awareness of London: “The river … flows sin-black, gorgeous … goulash of rat-runs and corner cuts.”

There is plenty of humour, even if it is often dark, in Susana H Case’s poems, such as ‘And Now Let’s Revisit Sex and Death’, about hoping not to find tell-tale signs of cancer;  and a poem about falling in love, despite the “the ketchup / darkening the rim of the bottle, the table sticky / with grease, Merle Haggard on the next booth’s jukebox”. Her most striking poem was about prising an old counter-culture hero, Abbie Hoffman, out of jail for the evening: “Abbie’s so sad  … and can’t stop / talking about how dull jail is, to which I reply / it’s not as much fun is it, as fifty thousand people / trying to levitate the Pentagon, which finally gets a smile / as he says, hey – but didn’t you see it rise?”

Daphne Warburg Astor, an artists and Faber Academy poet, took us on a road trip, “starting with New York in the Sixties”, and taking in Janis Joplin, Ornette Coleman, the Blue Ridge mountains, Route 66, Sante Fe, and the Rockies. One of her poems centred on the place in Idaho where Ezra Pound was born.

Minneapolis-born Tim Nolan’s poem, ‘Red Wing Correctional Facility’, was shortlisted for this year’s Forward prize for best single poem, after coming third in the Troubadour’s own poetry competition last year. The poem is one of several written during a month’s residency at a juvenile correctional facility in Minnesota. He talked about reading Walt Whitman, to boys from Chicago and New Orleans and Minneapolis: “and they are right there with |Walt / right there with his voice which they already know somehow / and I suggest what poetry can do, that it can cross mountains / escape prisons (they laugh like yeah sure).”

The poetry of Margo Taft Stever, whose Slapering Hol Press is based in New York state’s “Halloween capital”, Sleepy Hollow, has a gothic, if not grisly edge to it at times, whether it is about whaling, and how only a crane can lift the six-foot heart of a blue whale, earthworms in a backyard, or ‘Raven’s Rock’, set in Sleepy Hollow itself, setting for the Tim Burton horror film:  “What is a raven but a bird, a ghost / but a raven bird, and the ghosts of three women / ravenous, waiting at Raven’s Rock / for a single man to pass by”.

Owen Lewis, a psychiatrist and professor at Columbia University, read a poem, part of a long elegy sequence, set in a New York psychiatric hospital, and others from his first collection, Sometimes Full of Daylight:  “I can love you because I can look away … I can look away, and not make you the sun.”

Jennifer Millitello, from Goffstown, New Hampshire, writes poems about symptoms, diagnostic tests, and antidotes in her collection, Body Thesaurus, in an attempt to illuminate tensions that she sees as central to illness and health: “The many bicycles of memory, and their many broken chains.”

Philip Fried, editor of the international poetry magazine Manhattan Review, and with a number of poetry collections to his name, read from his latest, Interrogating Water, parts of which focus on the “national security state”. One poem, on the death penalty, talked of “one of America’s best-loved cocktails”. Another, written in the form of a military press release about the movement of troops, spoke of “a long-term quest to attain the presence … imposing rigour and bestowing mercy”.

The first half was rounded off with a thoughtful and tender rendition of Simon and Garfunkel’s ‘The Boxer’, by singer-guitarist Henry Fajemirokun, in the spirit of the American evening.

Billy Collins said earlier this year: “The Troubadour was the scene of the first reading I gave in the UK, and I count myself among the long line of poets who are eager to return and darken its doorway again.” Introducing the US poets, Anne-Marie Fyfe said: “Perhaps I should be saying, ‘Good morning, America, how are you?’ ‘’ I think the audience’s enthusiastic response provided her with an answer.

Background: The poetry news, from Sleepy Hollow and Greenwich Village

Poets back for more at Write Out Loud Marsden tonight ►