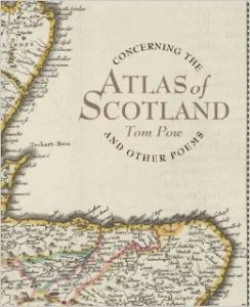 A military map of Edinburgh drawn up for Russian tank commanders has inspired a Scottish poet. Tom Pow, the first Bartholomew writer-in-residence at the National Library of Scotland, discovered the map while examining around two million rare and unusual maps that he was given access to last year.

The map, with street names in Cyrillic script, was intended for military use and for tanks driving around the city. It detailed factors such as the width of roads, type of road surfaces, height of buildings and bridges, as well as military installations, barracks and transport networks. Much of the information was believed to have been sent from Edinburgh to Moscow by staff working in Russian consulates for the KGB and other spies.

Pow, whose new collection is called Concerning the Atlas of Scotland and other Poems, told the Scotsman newspaper: “Of all the maps I saw in my time behind the scenes at the library, it was the 1983 map which did it for me. It was so disorienting, it had a dark purpose. I know Edinburgh pretty well, I was born in Craigleith, used to traverse the city to go to school, and I still go back. But it was just so disconcerting, I couldn’t work out where I was, despite Edinburgh’s simple geography, because of the Russian Cyrillic alphabet.

“Yet while I was floundering, a Soviet tank commander could find his way to my door. I was amazed at the reach and interest of the Soviet empire, to want to know so much about Edinburgh.”

Pow’s poem, ‘The Soviet Map Of Edinburgh’, imagines the map “animated in the field …  tanks rolling along Princes Street; a rash of proscriptions; a secret police, sifted from collaborator and believer alike; shadows haunting every street corner.” Another poem in the collection is about the first engraving of the Treasure Island map. Edinburgh’s Bartholomew map-making dynasty spanned six generations, beginning in the 18th century, and became the world’s leading publisher of maps and atlases.

◄ Better together? Advice for the Scots from Luke Wright's English toff