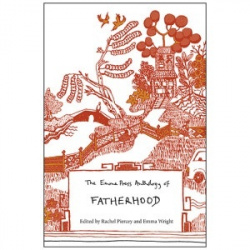 This anthology of fatherhood arrived hot on the heels of its companion anthology of motherhood, but that’s not surprising. The Emma Press specialises in anthologies and pamphlets; it has produced several already, and another, on homesickness and exile, is due to be launched next month. The anthologies are characterised by their attractive appearance, and come with illustrations by publisher Emma Wright.

But what of the poetry?  I’m happy to say that within this slim volume there are a number of fine poems. Included among them are Martin Malone’s moving remembrance of his father “between his first and third heart attack” (‘Digitalis’), and slam champion Sara Hirsch’s ‘Tonight Matthew’ – “for the first time I realised that you really were ill”. It’s her first published poem, and one that is successful as well as painful on the page: "So I boarded my train / and for twelve years I've been running from the words / The cancer has spread to my brain."

Robert Hamberger’s ‘Wave Machine’ is about a father who sees his daughter every other week: “I must drive / you home tomorrow: your place, not mine. You’ll make me count how many days until / you see me, using my fingers and yours to reach thirteen.” Hugh Dunkerley, who is working on his own collection about fatherhood, describes the fragility of a three-week-old baby – “a tender fish hooked too early” – allowed to leave hospital at last in ‘Coming Home’.

There are poems about deceased fathers who are still making their presences felt in Alan Buckley’s ‘Handshake’ -  “nothing now / is left unspoken”  - and John Saunders’ ‘My father is the breeze that opens the shed door’. Jeremy Grant’s ‘Rubaiyat’ describes with relish, delight and certainly realism a newborn child: “liquorice, pesto, mustard, tan: your poo / an ever changing palette … / Your smile is open to interpretation: / happiness or mild constipation?”

Richard’s Brien’s ‘Among the Doctors’, which concludes the anthology, is both touching and marvellous. A father ruefully concludes that his son – "You had your father's eyes, / which is to say not mine" - will not follow him in the same trade: “You always were a dreadful carpenter, / … I almost lost a finger / to your thoughts of higher things.” In his youth the boy goes missing for three days: “Your mother sent me in, / as if to call you in to dinner / from those learned men.” The poem ends movingly, a father bidding farewell to his son, and wishing him well:

Be who you are.

Tell everyone you meet who makes

The finest table legs in Galilee.

Put down your tools. Remember me.

A poem to remember, and a wonderful final one.

There is an absence of sentimentality in this collection that is undoubtedly a tribute to the rigour of editors Rachel Piercey and Emma Wright. I note that whereas the Emma Press motherhood anthology contains well over 40 poems, the fatherhood one is slimmer, with only 35, with the inclusion of nine further pages of publisher’s promotion material. That seems a tad excessive.  Nevertheless, I’m sure that plenty were snapped up in time for Fathers Day earlier this year – and I don’t think buyers or recipients will have been disappointed.

Why I admire Dylan Thomas: the influences on Argentinian poet Luis Benítez ►