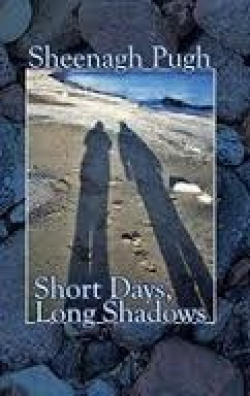 This consummate collection has the certainty of touch one has come to expect from Sheenagh Pugh, one of our finest contemporary poets. The opener, ‘Extremophile’, recently a Guardian Saturday Poem, is a celebration of life in the shape of bacteria, tubeworms and lichens:

so cold, so acid but some chancer

will be there, flourishing on bare stone

This sets the tone for the collection – life is precarious but indomitable, and to be celebrated with a fierce joy. At the time of writing most of these poems, Pugh moved from Cardiff to Shetland, so there is plenty of both saying goodbye to the old life and revelling in the new. Farewells and death abound; they are part of life, another journey to make. In ‘Terra Nova’, an old man celebrates his final birthday by eating steak and drinking red wine, while

of the ribs zipping to and fro

in the pleasure lake

This also shows Pugh’s dexterity with language. The assonance of ribs and zipping, a glorious juxtaposition, and the rhyming of wake and lake all helping to make the poem flow like water. Rhyme is used very sparingly, and so has the greater effect when present.

Death comes in ‘Naglfar’, an almost gleeful tale of the mythical Norse ship made of dead men’s toe- and finger-nails, which will come ‘sicking wolves on to swallow the sun and moon’. Fascinating as well as beautifully written. Death also gets a whole poem, ‘Walker’, in which he ‘moves like the shadow of a gull’ (one of many seabird references) and ‘sports the jester’s coat’. A sinister and surprising figure, but somehow he is never wholly triumphant here, for life might end but is never entirely quenched.

Seabirds turn up in guises that show Pugh’s sense of fun as well as enjoyment of nature: in ‘Tea with Skuas’ her wry eye observes  the behaviour of tourists as well as that of the surprising birds; in another poem, herring gulls are ‘Hecklers’, quite unfazed by VIPs. In fact they can despoil their posh suits, drowning soundbites with a shriek of ‘You’re not the boss of me!’

Pugh is an indefatigable traveller and it shows in her poems, as does her love of history, so that we get to span time as well as space as we read. ‘Medals’ charts the journeys of the sailor who was awarded them, from India where he broke all the rules – he drank the water, ate the fruit, ‘took no harm, loved it all’ to Russia: ‘pack closing in/and no way home’. We visit Trondheim and Pomor (‘The people-by-the-sea / live at the world’s roof’) and Landenberg, as well as Cardiff and Unst. We also visit the 16th century via the Hilary Mantel-ish poem ‘Walsingham’s Men’.

Through it all is the sound of the sea, and for me, a fellow sea-lover, the poem ‘The Sea’s Answer’ is worth the book’s price on its own. With the alluring opening, ‘I was talking to the sea the other day’, it relates a conversation in which the narrator asks the sea why all the metaphors and images used to describe it fail, however accurate they are. The sea gives the most marvellous response, answering the question very cleverly.

There is so much life and fun, even in the sadder poems. Writing of a bronze statue, Pugh describes him/it as chilled –

There’s a poem full of kindness about writing a letter to Dr Johnson; one of observation that ends in laughter in ‘Capybara Moments’; and always that lust for life. In ‘Later’ a child wants to feed the ducks now, not later as his busy mother has suggested. He knows that the feeding may well get ‘…pushed back // behind meals, hoovering’, the narrator remarking ‘… and I think the child is right / to scream’.

I have one niggle, but it isn’t a poetic one. In ‘The Vanishing Bishop’, a long-preserved body is excavated and looks very alive – but not for long, once the air hits it. I was  annoyed with the narrator (whom I sternly hope isn’t Pugh herself) - if one is going to dig up ancient remains, then for goodness sake take a camera.

The final poem is ‘Return’, an uplifting poem of rebirth and renewal. In Pugh’s capable hands, the reader gets uplifted and renewed, whether they like it or not. ‘What the earth takes, it gives again’, we are told firmly at the start. Every tenant’s ‘leasehold / on light’ is renewed, ‘…even though we know // few are paroled, none pardoned.’ But there is a possibility that ‘…indeed love / could go down deep enough to bring us back’.

Can you imagine setting that as a writing exercise – ‘draft a poem of renewal and hope, suggesting the possibility that love has the power to bring us back’. The results would probably form the worst that poetry has to offer. It takes a master not just to make it work but make it shine, as a glorious finale to a book that made me feel about 10 years younger, lungs filled with sea air, mind soaring, body – well, I can’t expect miracles.

◄ Spoken word at the Edinburgh Fringe: here's a guide to some of the shows