Spoken word at the Edinburgh Fringe: here's a guide to some of the shows 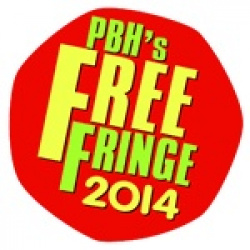 Write Out Loud is offering a guide to some of the spoken word highlights at the Edinburgh Fringe. Spoken word makes up just 4% of the total fringe programme - but that is up from 2% last year, with a total of 124 shows in 2014. One big event is undoubtedly Rob Auton’s new The Face Show, which is on at 4pm from 2-23 August (not 3rd or 12th), at the Banshee Labyrinth at 4pm-5pm, as part of PBH’s Free Fringe. Auton said: “It is about me trying to come to terms with the fact that I have got a face.” Last year the quirky poet-comedian won the award for the funniest joke of the Edinburgh Fringe, about Cadbury’s chocolate.

Phill Jupitus returns to Edinburgh as Porky the Poet in Juplicity, at The Jam House in Queen Street, for what's billed as “a show of brand new poetry for 2014, with at least two new poems performed each day”. Guests will include Luke Wright, Mab Jones, Martin Mor, Bob Hill, Clare Ferguson-Walker, the Panic Brothers, and “many more”. It’s free to get in, from 2-23 August (no show on Monday 11 August), from 5-6pm.

Matt Harvey and Kate Fox will be appearing with compere Julie Mullen at the Word Café  at Queendome from 5-9 August. Then the Word Café moves to Bunker One from 11-25 August for 'Mullen's Mélange', an “evolving daily mash-up of high-energy standup poetry and music” … and including at different times Liz Lochhead, Rob Auton, Alan Wolfson, Mel Jones,  Rachel McCrum, Mab Jones, and Monkey Poet (see daily listings).

Kirsten Luckins returns with The Moon Cannot Be Stolen, recently voted runner-up in the Saboteur Awards 2014 for best spoken word show. Based on true travel journals, it's a journey through 90s India from the rave scene of Goa to the holy city of Varanasi, both humorous and dark. It's on at PBH Free Fringe, Royal Oak, 2pm daily from 11-15 August.

Rap storyteller Jack Dean will be performing Threnody for the Sky Children, "a surreal modern fable that fuses mythology and music with a hint of zombie apocalypse", at the Electric Circus Lizard Lounge, from 4-8,11-15, and 18-22 August, from 11.30am to 12.20pm. It's a PBH Free Fringe event.

Dan Simpson's show, Applied Mathematics: Spoken Word for Geeks, will include "lively poems, smart jokes, and awesome flipchart presentations for geeks, nerds, and anyone who likes playing with words. Videogame verse and sci-fi-filled stanzas combine with meta-metre in an engaging show." It's on from 16-24 August, at 2.45pm at the Cortado Cafe, Canongate, and it's free.
Richard Tyrone-Jones will be offering “humorous, poetic, scientific musings on cardiocybernetics, companionship and regeneration”, from 2-23 August at Pilgrim in Robertson’s Close, from 1.45-2.45 pm. Crap Time Lord is a sequel to Big Heart, Radio 4’s first, Pick of the Week-featured, spoken-word sitcom. His other show is What the F*ck Is this?, at the Banshee Labyrinth from 2-5, 7-12, 14-19, 21-24 August, starting at 11.30pm.

Stand-up poet Angie Belcher will be performing Settle Down, “a poetic romp of dirty stanzas and awkward observations about approaching 40 via agnosticism, angry computers and puppies vs boys”. It’s a one-hour show at the Electric Circus Lizard Lounge, from 18-22 August, and a 30-minute show at Moriarty’s Bar, from 26-31 August.

Slam-winning poet James Webster will be presenting the world premiere of 50 Shades of Webster, “a witty and lyrical poetry-play that puts a time-travelling twist on the idea of self-discovery”. Dates are 14th, 15th and 18-22 August, at 2pm, at the Electric Circus Lizard Lounge. And it’s free.

Gary From Leeds will be performing his debut solo show Yeti, “50 minutes of comic verse and silliness about finding the yeti within, and without, in Leeds and other places” at the Royal Oak, from 2-23 August, as part of PBH’s Free Fringe. It starts at 1pm.

Loud Poets, a spoken word collective of slam champions, and guests including Mark Grist, Paula Varjack, and Richard Tyrone Jones, will be appearing at the Scottish Storytelling Centre from Aug 1-6, 10-13, 20, 24, with two showcase events at St John's, Princes Street (15th and 22nd) and an open mic at St John's on 8 August.

Newcastle’s monthly spoken word night Jibba Jabba will be part of the PBH Free Fringe in Edinburgh from 2-6 and 8-15 August. The shows will be held at Pivo, starting at 6pm until 6.55pm, and will be “shorter versions of the Newcastle format, featuring three different, fantastic guest performers every night, and the usual quick-fire, mic-grab, open stage shenanigans. (limited to 2-3 minutes at a time).”

For those who might consider venturing beyond poetry while at the Fringe, storyteller Tim Ralphs presents Rebranding Beelzebub at the Banshee Labyrinth from 2-24 August, an hour-long show starting at 9.50pm.

And electropop duo Project Adorno, who are much in demand at poetry nights, will be presenting their alternative retrospective of gay film-maker, writer and artist Derek Jarman at The Vault from 13-17 August.

Meanwhile, in the possibly calmer atmosphere of Blackwell’s bookshop at South Bridge, popular Midlands poet Bert Flitcroft will be taking part in a reading at one of Blackwell’s regular Writers at the Fringe events on 7 August at 6pm.