Weather, birdsong, exposing yourself: Jo Bell on the 52 project's success 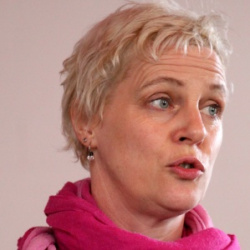 It began as a new year resolution – to encourage the poetry community to write a poem each week, for all 52 weeks of the year. Within days there were 3,000 people following canal laureate Jo Bell’s 52 blog, and its Facebook group now has 560 members. Prompts and their possibilities have included “exposing yourself”, the weather, sport, the high street, the sky at night, birdsong, insects, historic figures, sounds, and the body. Jo said:  “The work rolled in – and the hairs stood up on the back of my neck, as I saw the quality of poetry that had been unleashed.” On Sunday 20 July there was a special reading of Poems from the 52 Project at Stratford-upon-Avon poetry festival. In an article for Write Out Loud, Jo Bell talks about the 52 phenomenon:

“On New Year’s Eve, I was at home on my boat with friend and poet Alan Buckley. People all over the country would be making resolutions the next day, to write more. Yawn. What would be a realistic resolution – a poem a day? Not likely. A poem a week, for the 52 weeks of 2014? That was more like it.

It had been a difficult year for me, and one in which my own poetry work had fallen by the wayside a little. The poetry community I’ve long been part of had supported me, buoyed me up, given me nourishment when I most needed it. So my own resolution was to put something back into the great ecology of poetry; I would set up a site called 52, and provide a prompt each week. I would ask esteemed guests to contribute once a month – Luke Kennard, Neil Rollinson, Hilda Sheehan for a start – and set up a closed Facebook group for anyone who wanted to share their work and critique it, without making it invalid for publication. It would be done for free, and done well.

Reader, it went ballistic. Within days there were 3,000 people following the blog – and the Facebook group now has 560 members. It has become something of a poetry cult. Its members are getting published, many for the first time ever, in journals from The Interpreter’s House to Bare Fiction and Domestic Cherry. Their work has appeared on reputable websites – Spontaneity, And Other Poems, Fake Poems, Angle, Ink Sweat and Tears, and Mapping Scotland in Poetry.

Why? Well, the prompts are good, if I say so myself. They are not the spoon-fed “here is a photograph of autumn trees, write about it in the same style as every other bugger” type, nor the technical “write a sestina” type which teaches technique but can stifle experiment. I want prompts to uncover something real and distinctive in the poet’s own story, and take it in any direction that seems useful. Each prompt includes three or four good contemporary poems, because the key to writing well is to read well. And we are all about writing well.

The prompts are only half of 52 – the Facebook group in which we meet and share our poems is the livelier half. In week three, when the first members of the group were just beginning to find their way around, I took the kid gloves off and asked them to write about their own naked bodies. Don’t imagine it, do it, I said. Don’t shy away into the glib untruths of “Oh, my breasts are sagging but hey, I’m so wise and I wouldn’t trade it for the world!” Refuse cliche. Look at the world as clearly as you can. Write about it, really, properly. Tell us what you know, and write it well. Tell the truth.

Be careful what you wish for. The work rolled in – and the hairs stood up on the back of my neck, as I saw the quality of poetry that had been unleashed. Since then, I have been constantly humbled and astonished by the leaps of faith and the spikes of development that 52 has permitted.

Some of our poets are many times published, some are just finding their way. We don’t revere the former nor patronise the latter. What makes 52 unique is the level of trust; people trust the prompts to take them somewhere interesting, so follow wherever they lead. They also trust each other. By now the exposure has gone far beyond poems of nakedness. We have had poems about rape and sexual abuse, about violence and one at least whose author had first to tell her husband about the event she was finally ready to share with 500 strangers. But these are never “therapy” poems. They are the real thing, and we pay them the courtesy of critique. 52-ers recognise that these poems express deep personal experience – why else would you write them? But we also are intent on making them the best poems they can be – why else would we want to read them? We’ve had hilarious, moving, surreal or WTF poems. People have written ongoing sagas about parents in care, friends’ funerals or side-splitting conversations.

Much of this could be done in a real-world poetry group, couldn’t it? Yes, but 52 has confirmed over and over again the suspicion that led me to set it up. There is a mass of talented poets out there who doubt their own ability so much that they would never get in the door of a Stanza group, a local poetry group, a workshop, much less send work to journals. They don’t enter competitions because they are convinced that others are writing works of genius, they take every rejection deeply to heart because they think themselves uniquely unsuccessful. Some of them have fallen off the poetry wagon, others are waiting for permission to get on it in the first place; and some long-established writers are energised by seeing work from others, spurring them on to do better on the same topic. It’s an informal academy, which displays different approaches to each subject, illustrates how to fail or succeed and provides a huge group of people wishing you well as you send off that submission.

Now in 52, we have people saying “Hurrah, I have just had my first rejection slip – I am on my way!” Less confident writers have seen that everyone makes cock-ups in the first draft. Many-times published writers have stepped up to the mark, shared their most raw work, and taken critical comment on the chin. Never-published writers have a yardstick against which to measure their own work. Everyone’s voice sings a different song. And the sheer mass of comment is useful, as it gives immediate and often unanimous feedback on what needs clarifying or editing.

I am amazed at the number of people who’ve written a poem every single week and reported an exponential surge in their rates of work; amazed too at how unusual this group is, since it seems a perfect use of social media. The banter levels hit 110% every Wednesday night as the members wait for the new prompt, which goes live on Thursday at 07:22 UK time. We rejoice together, across continents, in successes of all kinds. “Success” for one person may mean publication in Poetry Review; for another, “success” means that they finished a poem they are perfectly happy with, for the first time. It all counts.

Lately I’ve had to give 52 less time – my own readings and events have taken up more time, and I have a paid residency till early August which gives my own writing space to expand. My presence in 52 is less vital than it was, because the group has grown into a community where we know each other’s work and weaknesses. Moreover, continual prodding – lose the last two lines, lose the unnecessary stanza at the beginning, lose all those florid adjectives – has made everyone’s poetry leaner, better. There is no “school of 52” style – the voices are splendidly varied with some writing experimental verse, some settling into prose poetry, some writing haiku or collaborative sequences with other members.

But if you see yourself as part of a poetry ecosystem where everyone can both contribute and benefit from others’ input – if you know that deep, incisive critiquing can always be done with kindness, and you can both offer and receive it in that spirit – and if you want to write the very best contemporary poetry, with the support of others – then maybe it is. Which is a shame, because with 560 members I’ve called a halt to new Facebook membership for now.

On Sunday afternoon some of us will meet for the first time at a picnic in Stratford-upon-Avon poetry festival, where I am poet in residence. Those who can be there will share work, put names to faces at last, and try to forget the intimate things they already know about one another’s chemotherapy or heartbreaks. Those who can’t be there – we will raise a glass to you.

52 is a phenomenon. Poets at all levels have found new subjects, have agreed to write themselves far beyond their comfort zones and on, into that sweet spot, the difficult or exposed place where the best poetry comes from. I cannot express how proud I am of what it’s become, and the many successes of its members. It’s the best thing I’ve ever done. As the nights draw in, thoughts will turn to what happens on December 31. Watch this space.”

Respect to you Joby. All hail the Poetry Commonwealth.

I'm lapsed somewhat on this owning to lack of time. I managed the first three months, then did Napwrimo in April and fell out of time after that with it.

Need to get back onto it and I will! But a great success story.

Great article Jo, and yes, 52poems is all of those wonderful things you describe. Especially the prompts -usually they niggle at me for several hours and then a first line appears - and the community and their poems ... + lots to learn from in a kind yet tough and balanced place.
Well done and thank you for all your hard work.

Thanks very much for this great article, Jo, and congratulations on the success of 52. A good-news story, inspiring!