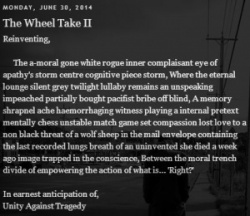 In earnest anticipation of,

◄ Moved by a Wheel